2017 has revealed an increase in the number of voluntary retirements and resignations of the members of the parliamentary forces. The news reached the Lok Sabha, the CRPF and the BSF has seen the most number of personnel leaving.

Personnel who left the Asssam Rifles left because of a host of different reasons like health, family, society and availing pensionary benefits after 20 years in service. Being part of the parliamentary forces while being respectable is one that requires grit, sacrifice, and courage. It’s not news that in the past the personnel have alleged long work hours, inadequate facilities, etc. In recent times the job to serve in the forces has become increasingly hard.

On 28th March, 3 bags of explosives were found near a CRPF camp in Rajourai, Kashmir. As a precautionary measure schools were closed during the day in the area. After suspicious movement in the camp was spotted the sentry at the camp fired warning shots and sounded the alarm to alert the camp. A search operation is underway in the area but no attack was reported. CRPF jawans have also lost their lives in Chattisgarh due to attacks by the naxals. As the high-risk jobs get even more difficult it causes much unrest and disappointment among those who are serving the country to maintain peace and protect the citizens. 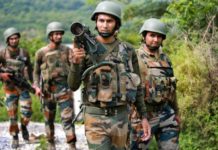