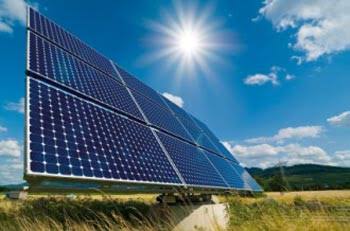 This was for the first time when solar was the top source of new power capacity additions in India during the year 2017.

India has achieved a milestone target of 20 GW in cumulative solar installations in eight years. The National Solar Mission had initially set the target of 20 GW (giga watt) installed capacity by 2022. This has been achieved four years ahead of time.

The achievement comes on the back of a major renewable energy push by Modi government, which after coming to power in 2014 had scaled up the target to 100 gw of solar capacity by 2022.

For the first time, solar was the top source of new power capacity additions in India during the calendar year 2017, with preliminary figures showing solar installations reaching 9.6 gw in this period and accounting for 45% of total capacity additions.

But the country has reached the milestone at a time when protectionist measures threaten to slow down activity in the industry. The pace of overall solar installations is expected to be less impressive in 2018 as several protectionist government policies appear poised to increase costs and uncertainty.

The National Solar Mission was launched on the 11th January, 2010 by the Prime Minister. The Mission has set the ambitious target of deploying 20,000 MW of grid connected solar power by 2022 is aimed at reducing the cost of solar power generation in the country through (i) long term policy; (ii) large scale deployment goals; (iii) aggressive R&D; and (iv) domestic production of critical raw materials, components and products, as a result to achieve grid tariff parity by 2022. Mission will create an enabling policy framework to achieve this objective and make India a global leader in solar energy.

And now the target of 20,000 MW under National Solar Mission is achieved ,this is a huge achievement .