Inequality kills: Oxfam uncovers the worst of inequalities in India, the country’s 10 richest can fund school and higher education for 25 years The world has witnessed Oxfam become an extreme proponent of rooting out inequality as a necessary evil and be a harbinger of equality throughout the world.

And in an attempt to uncover the same and astonish the callous humanity with its gross calculations, especially when we have begun to realize that effects of the pandemic have been far over.

According to the Oxfam charitable family, the pandemic has been deemed to support and nourish the world’s wealthiest while it simultaneously led more people to sink in poverty.

When the pandemic made us believe that it made drastic changes to everyone’s life, it was not a truth in perpetuity. And hence, it widened an already existing divide: between rich and poor, between the user of resources and the needy, between the source and sink of considerable perils of Earth.

The world’s richest 1% have been found to emit more than twice as much carbon as the poorest 50% on Earth.

It has been claimed that since March 2020, the world’s 10 richest men have more than doubled their fortunes, because of the dire conditions and desperate needs of the people.

But the people who needed utmost attention and blanket protection succumbed to a staggering 21000 deaths in a day because of their miserable incomes, as per the report.

This accounts to a death in every four seconds.

According to the Oxfam International Inequality kills report, inequality in the economic sphere has cut the income of nearly 99% of the world’s population, and consequently forced over 160 million people additionally into poverty. 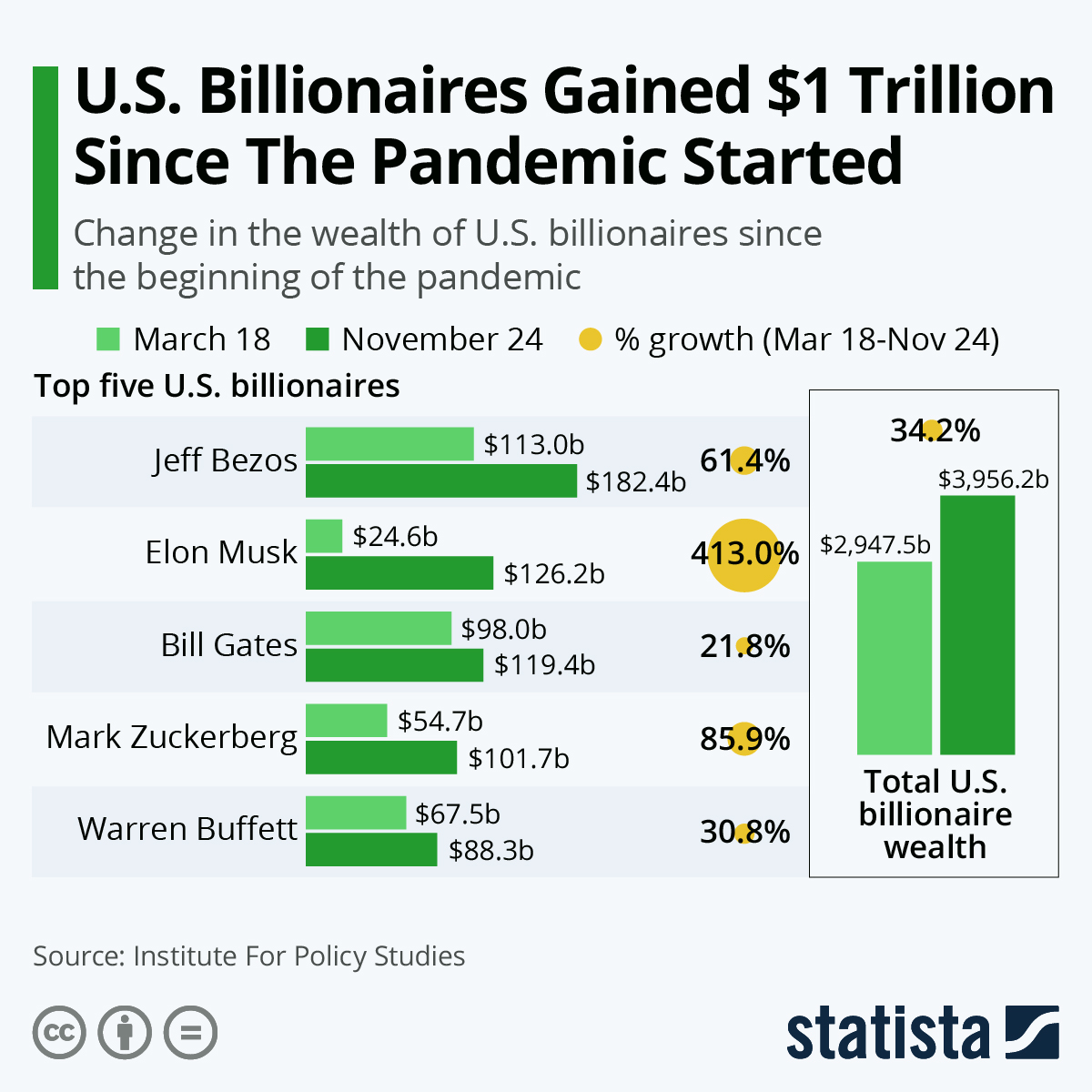 However, it has to be acknowledged that this growth came differently. Where Elon Musk registered a fortune growth of more than 1000 per cent, Bill Gates wealth prospered by a rather modest 30 per cent

“Even during a global crisis our unfair economic systems manage to deliver eye-watering windfalls for the wealthiest but fail to protect the poorest”, explains an Expert.

“Billionaires have had a terrific pandemic. Central banks pumped trillions of dollars into financial markets to save the economy, yet much of that has ended up lining the pockets of billionaires riding a stock market boom”.

“Vaccines were meant to end this pandemic, yet rich governments allowed pharma billionaires and monopolies to cut off the supply to billions of people”.

On these lines, certain developing countries have been devoid of access to sufficient vaccines. This happens because the rich, developed, technologically sound nations provide protection to the pharmaceutical companies strengthening their monopolies.

Consequently, these desperately needy countries were forced to slash their capital expenditure on social security measures and began to face the prospect of austerity measures.

And this led to greater number of mortalities because of COVID-19 in developing countries which is roughly double of such statistics in the developed ones.

Problem is that this divide, as it deepens, leads to multiple ripple effects, explains the Executive Director of Oxfam: “The world’s response to the pandemic has led to a deepening of every kind of inequality. Not only does inequality create unhealthier, unhappier societies – it is violent. Inequality kills.”

Can we call the pandemic a racist?

If we are to call the pandemic and its beings, a racist, we would not be wrong. Though this inequality had a grave hit on women, children, ethnic marginalized minorities, migrants and even developing countries, it even took a different turn.

In the second wave of pandemic as explained in the report, people of Bangladeshi origin suffered and succumbed five times more to death because of COVID-19 than the resident white British population, in England.

In Brazil, the woes surrounded its black population which were 1.5 times more likely to die from COVID-19 than their counterparts.

In the U.S., 34 lakh Black Americans would be alive today if their life expectancy was the same as White people,

This did not stop here. If we are to believe the World Economic Forum’s Global Gender Gap report, it would take another generation i.e., 135 years for women to reach parity as they lost $800 billion in earnings alone in 2020. 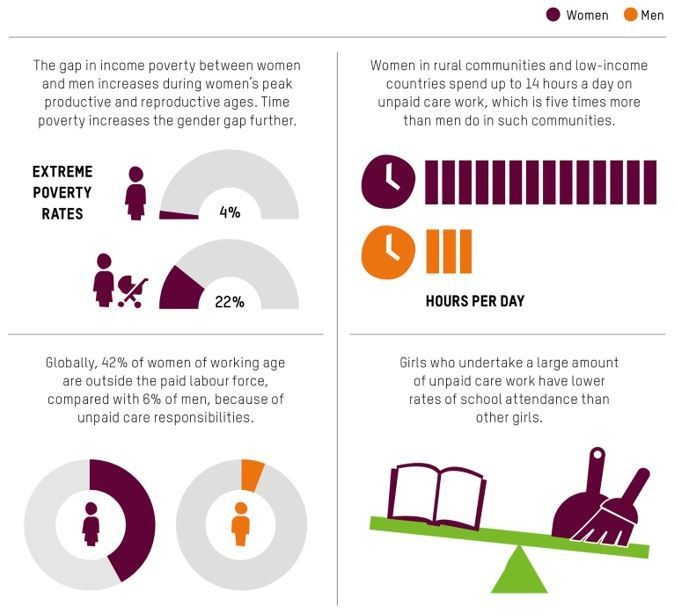 Methodology used by Oxfam to derive such figures:

The report has drawn its data from the Forbes Billionaires List to ascertain the lavishing living standards of the rich and the annual Credit Suisse Global Wealth report to understand the distribution of global wealth.

It also uses data obtained from the World Bank.

It is to note that the Forbes survey composes the value of an individual’s assets, which majorly includes property, land while excludes debts, wages or incomes, to exactly determine what one ‘owns’.

And therefore, it attracts criticism.

The values determined by Oxfam, have been adjusted for inflation because of the price rise during pandemic using the Consumer Price Index (CPI), that tracks the change observed in the cost of living.

Corona virus and its off-shoots have continued to ravage India, with a strike on poverty, hunger, degrading education access and even healthcare, losing livelihoods and equally increasing unemployment.

But it has been interesting to know that India’s healthcare budget, despite the perils, saw a 10 per cent decline from its revised estimates for the year 2020-21.

The report has highlighted the chink in the budgetary allocation for social security schemes in India as they continued to decline from 1.5 per cent of the total Union budget to a mere 0.6 per cent. 6 per cent allocation cut for education alone has even surfaced.

Certain other wealth indicating reports, in regards with India, have visualized 2021, with 100 richest people attaining a high record of Rs 57.3 lakh crore (USD 775 billion) while the share of 50 per cent of the population lying in the lower strata of Indian society will fall to a miserable 6 per cent in national wealth.
Even in the pandemic accounting from March 2020 to November 2021, Indian billionaires recorded an increase from Rs 23.14 lakh crore (USD 313 billion) to Rs 53.16 lakh crore (USD 719 billion).

We can choose to call it empowerment, increased investment opportunities, impetus to Entrepreneurship etc., but the number of Indian billionaires grew from 102 to 142, growth of 39 per cent.

Whereas the other 4.6 crore Indians in the same time period, fell into extreme poverty. These additional numbers, as per the United Nations, account for half of the global new poor.

Indian tax structure and the imbalance it spurs:

The report has pointed out an increase in the country’s indirect tax share within the Union government’s earnings while the direct tax share has declined in last four years.

This has happened because of the lenience given by the Government on corporate taxes by slashing them from 30 per cent to 22 per cent in order to attract greater investments last year, resulting in a loss of Rs 1.5 lakh crore, expanding India’s fiscal deficit.

As per the report: “These trends show that the poor, marginalized and the middle class paid high taxes despite going through the raging pandemic while the rich made more money without paying their fair share.’’

Therefore, the wealth tax required to balance the ‘super rich’ got abolished in 2016.

Taxes additionally imposed on fuel have risen by 33 per cent in first six months (FY2020-21) and even 79 per cent more than pre-Covid levels.

Direct taxes on ‘super rich’ and their potential uses:

If the richest 10% of the country are taxed even 1 per cent additionally, can provide nearly 17.7 lakh extra oxygen cylinders, and funding Ayushman Bharat for next seven years would be easy with a wealth tax on the 98 richest billionaire families.

With the same amount, India could finance its entire vaccination programme that is worth Rs. 50,000 crore ($6.8 billion).

The wealth of top 100 billionaires in India could potentially fund the National Rural Livelihood Mission (NRLM) scheme for next 365 years.

This neglected 1% of an additional tax, if imposed on wealth of the 98 billionaires, will be able to nourish the annual expenditure of country’s beleaguered school education and literacy under the Ministry of Education.

While this fictional but progressive imposition of 4 per cent on their wealth in India could finance the Ministry of Health and Family Welfare (MOHFW) for more than two years with their total combined wealth standing at 41% more than the entire country’s annual Budget.

This mere 4% can fulfil the needs of Mid-Day-Meal scheme aimed at reducing hunger, anaemia, malnourishment etc. in children and even expectant or lactating mothers of the country for next 17 years, Samagra Shiksha Abhiyan for six years or Mission POSHAN 2.0 for the next 10 years.

This is an umbrella scheme that covers Anganwadi Services, Scheme for Adolescent Girls, POSHAN Abhiyan (including the ICDS– Integrated Child Development Services), and National Creche Scheme.

India has 131 ongoing food programmes yet the Food and Agriculture Report, 2018 has stated India to host nearly 195.9 million of the total 821 million undernourished people in the world.

In other words, 24% of the world’s hungry and 14.8% of undernourished exist in India, a number higher than both the global as well as Asian average.

It is important to note that this surge in individual incomes occur at a time when India’s unemployment rate lingers as high as 15 per cent in urban areas and its healthcare services remain battered and over-crowded. Do these statistics suggest a thing?

Surely, something is deeply flawed within our economic system.

Can something be done to reduce Inequality well entrenched in our society?

“It has never been so important to start righting the wrongs of this obscene inequality by targeting extreme wealth through taxation and getting that money back into the real economy to save lives,” the report has stressed.

Inadequate governmental expenditure on core aspects of society like health, education, is changing in proportion with an increased privatization of health and education.

Governments can come to the rescue of their citizenry in every regard.

The report explains this how: “We call upon the government to redistribute India’s wealth from the super-rich to generate resources for the majority by reintroducing the wealth tax and to generate revenue to invest in the education and health of future generations by imposing a temporary 1% surcharge on the rich for health and education”.

Country’s new wealth can be taxed through permanent wealth and capital taxes, which could then be diverted and spent on universal healthcare or extension of social protection, climate change adaptation or maybe Research and development.

Help ensure the safety and lessen the vulnerability of women or other marginalized groups which are required to be represented in all decision-making arenas.

The intellectual property rights need to be waived off over COVID-19 vaccine technologies or any allied healthcare tools, to allow more countries provide safe and effective vaccines to their poor population.

“Rich governments must immediately waive intellectual property rules over COVID-19 vaccine technologies to allow more countries to produce safe and effective vaccines to usher in the end of the pandemic.”