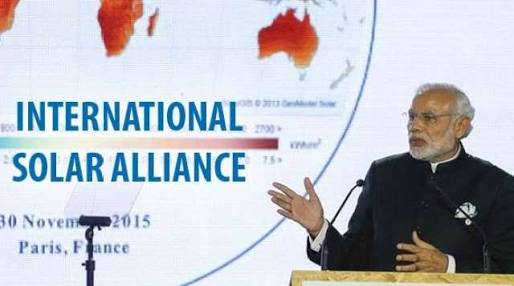 The ISA is the first treaty-based intergovernmental organisation to be based in India that aims to help sunshine-rich developing countries to tap solar energy at more affordable prices.

Prime Minister Narendra Modi and French President Emmanuel Macron co-hosted the first edition of the International Solar Alliance (ISA) Summit at Rashtrapati Bhavan today, the spotlight was on India which is being viewed as a key player in tapping solar energy.

The ISA is the first treaty-based intergovernmental organisation to be based in India that aims to help sunshine-rich developing countries to tap solar energy at more affordable prices through aggregating both demand and risks in order to bring down costs and secure investments of solar developers.

PM Modi has presented a 10-point action plan to make affordable solar technology available to all nations, which included raising the share of electricity generated from photovoltaic cells in the energy mix, framing of regulations and standards and consultancy support for bankable solar projects.

The prime minister also pledged to generate 175 gigawatts (GW) of electricity in India from renewable energy sources by 2022.

Macron along with PM Modi will open a new 100 megawatt solar plant near Varanasi tomorrow. “We should not forget that we only have one planet and we are sharing it and for that there is no alternatives. There is a joint destiny which means we also have some joint duties,” President Macron said.

The summit focused on various aspects of promoting solar energy, such as credit mechanism, crowd-funding and sharing of technological breakthroughs, in 121 prospective member countries — 60 have signed the treaty and about 30 nations have ratified it.

Twenty three heads of state, senior representatives of many countries, and many ministries are participating in the summit, where various projects, including rural electrification, off grid solar power will be discussed.