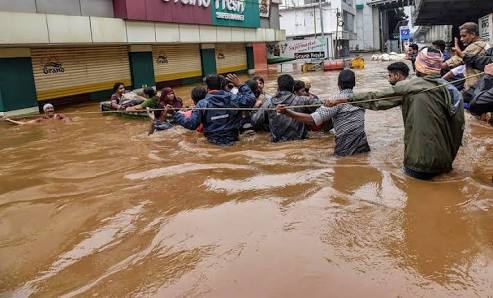 A meeting of The National Crisis Management Committee (NCMC) was held on Thursday, where the Centre decided to scale up the assistance and rescue and relief operations in the flood-affected Kerala.

As per the statement released by the Ministry of Home Affairs, 18 teams of NDRF, 9 columns and 8 teams of Engineering Task Force (ETC) of the Army, 22 teams of Coast Guard, 24 diving teams of Navy along with helicopters, aircraft, boats, equipment, life buoys, life jackets and other essentials have been sent to Kerala to aid in rescue operations and evacuation of stranded people.

MHA informed, that so far 2,182 persons have been rescued, 968 stranded people have been evacuated with the help of NDRF, Army and Navy.

The NCMC meeting was conducted on the instructions of Prime Minister Narendra Modi. PM was approached by the Cheif Minister of Kerala Pinarayi Vijayan requesting for more assistance in the state.

The Cabinet Secretary directed in the NCMC meeting that relief material including the supply of drinking water, dry food packets and powdered milk should be dispatched to flood-hit Kerala, reported Economic Times.

The MHA stated, that for proper reservoir management in the Mullaperiyar Dam, a committee formed by Sinha and headed by the chairman of Central Water Commission and Engineers-in-Chief of Tamil Nadu and Kerala.

NCMC will meet again on Friday to review the condition.

CM Vijayan has announced that 324 people have died in the floods so far. Prime Minister Modi will be reaching the state today to assess the situation.