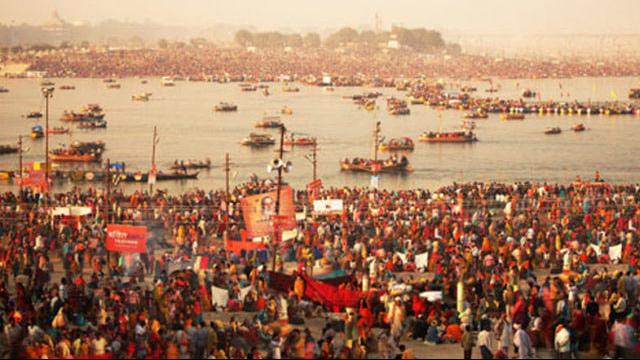 The Prayagraj Kumbh Mela 2019, world’s largest religious event began on Tuesday with a holy ‘shahi snan’ [Holy Dip], over 12 crores are expected this year. As a part of ‘shahi snan’ sadhu belonging to ’13 akharas’ take a dip in the holy rivers along the banks of which Kumbh Mela is organized. The tradition of ‘Shahi Snan‘ dates back to 14th-16th Century.

#WATCH Hindu seers and saints head towards Sangam Ghat for a holy dip in river Ganga on the occasion of first ‘Shahi Snan’ at #KumbhMela2019 in Uttar Pradesh's Prayagraj (Early morning visuals) pic.twitter.com/9PBx4yBODE

Due to the large number of people expected in the mela, the state Government has geared up the security, restricted the entry of the vehicles, other than those required for essential services, near the Kumbh Nagari, sprawling over 32,000 hectare.

The Uttar Pradesh government has allocated 4200 crores for this year Ardh Kumbh, more than thrice the budget of the Purna Kumbh in 2013, which occurs every 12 years. Though this is Ardh Kumbh but the Bhartiya Janta Party government in the state has changed its name to ‘Kumbh’ and Poorna Kumbh which happened in every 12 years have been renamed to ‘Maha Kumbh’.

Prayagraj, earlier known as Allahabad, is all decked up for the Kumbh Mela. From street art to top-of-the-line tents to over 1.22 lakh toilets, the Uttar Pradesh government has not left any stone unturned in order to make the religious event a big success.

The Kumbh Mela which runs until March 4 was recognized as an intangible culture event by UNESCO in 2017.