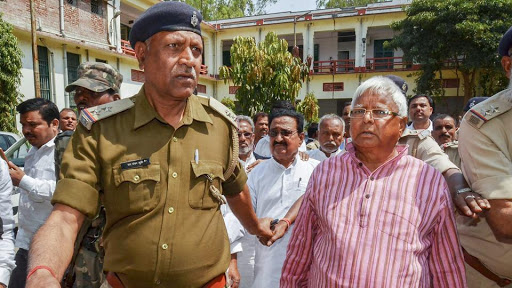 A CBI special court convicted RJD chief Lalu Prasad on Monday in yet another fodder scam case — pertaining to withdrawals worth Rs.3.31 crore from the Dumka treasury between 1995 and 1996.

He was earlier convicted in all three fodder scam cases that were disposed — two concerning the Chaibasa treasury and one the Deoghar treasury.

Lalu is the only politician to be convicted in the fourth fodder scam case. All other politicians, including former Bihar CM Jagannath Mishra, were acquitted. Of the 31 accused, the court convicted 19 people.

Hearing of the Judgement :

Judge Shiv Pal Singh said hearing on arguments for quantum of sentence would begin Wednesday and the punishment is likely to be announced Friday. “We shall take up six cases each day and dispose the case by March 23.” Lalu and four others were not present in court when the judge pronounced the verdict. Though the court waited for their arrival, it took longer for the RJD chief to arrive from Rajendra Prasad Institute of Medical Sciences, where he is undergoing treatment. Lalu arrived after the verdict was read out.

The judgment came as a surprise for Lalu and RJD supporters because all other accused politicians — Mishra, former MP Jagdish Sharma and former MLAs R K Rana Vidya Sagar Nishad and Dhruv Bhagat — were acquitted.

RJD leader Raghuvansh Prasad Singh reacted, saying: “It is strange that in the same nature of case, two people are sentenced differently. Everyone understands why it is being done. This game is being played by PM Narendra Modi and BJP.” All 10 animal husbandry officials accused in the case were found guilty.