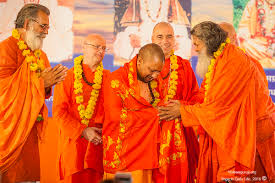 After the Election Commission banned the campaigning for Yogi Adiyanath in response to his violation of the Code of Conduct by using irrelevant remarks in the speeches, Yogi Adityanath took to Hanuman Setu temple in Lucknow and recited the Hanuman Chalisa there. He refused to respond to any media persons regarding any questions for BJP and addressed everyone with a smile.

Yogi Adityanath is also the priest of the Gorakhnath temple in the eastern Uttar Pradesh, has received an order of not to campaign for 72 hours.

The following orders have come from EC because of the derogatory remarks made by Uttar Pradesh Chief Minister Yogi Adityanath while he was addressing a rally and retorting to Mayawati’s statements.

BSP chief, Mayawati was addressing a rally in Deoband, Saharanpur on April 7 where she appealed to the Muslim voters to cast their votes in the favor of the alliance rather than distributing their votes and ending up in a victory of the ruling party. She received Election Commission’s orders for her statements of dividing the votes on the basis of religion and spreading religious hatred.

After the Election Commission’s notice to Yogi Aditynatha previously for his statements that invited Armed forces in the political propaganda have warned him of such actions. However this time EC took a strict action banning both, Mayawati for 48 hours and Yogi for 72 hours to campaign.

In defense, Yogi Adityanath expressed his religious sentiments towards Bajrang Bal and his intentions of the speech. However, the previous speeches added to his wrong.

The Lok Sabha elections for the first phase started on April 11. The elections will be held in even phases an will continue till May 19. The results will be announced on May 23.