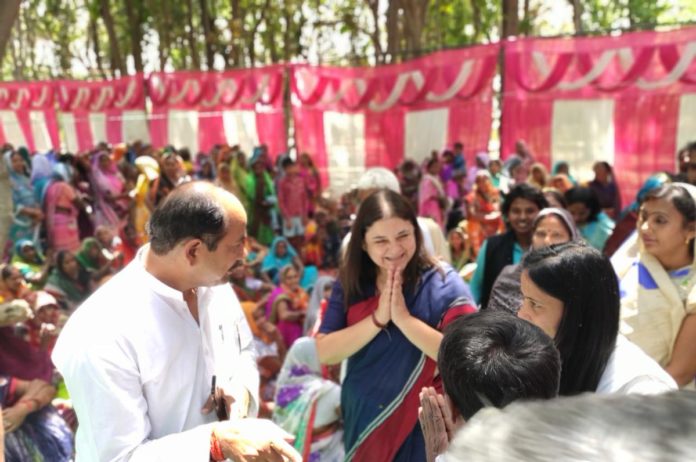 While Mahagathbandhan has named BSP‘s Chandrabhadra Singh alias Sonu Singh from the seat.

Ahead of filing her nominations, Maneka Gandhi held a roadshow to reach District Collectorate Office.

READ: Here is the list of Candidates announced by BJP-led NDA For Lok Sabha Polls 2019

Maneka Gandhi contested her first elections from Amethi constituency in the 1984 general election but lost to Rajiv Gandhi. In 1988, she joined V.P. Singh’s Janata Dal and became the General Secretary. In November 1989 Gandhi won her first election to Parliament and became a Minister of State as the Minister for Environment.

In 2014 National Elections, she had won from Pilibhit Parliamentary Seat.

The Election Commission on Monday this week ban Gandhi from Campaigning for 48 hours after she made a controversial remark while addressing a rally.

She reportedly said, ‘After elections, If any Muslim come to me asking for work, then I will think let it be, After all, a giving job is also a deal,” she said, while adding that Muslims here need to understand that she is not like others who will work for everyone without getting their support’.

She has been booked by the Poll Commission for violating the Model Code of Conduct.

Uttar Pradesh which has a total of 80 seats will go to polls in all seven phases starting from April 11. The Lok Sabha Seats of – Gautam Budh Nagar, Ghaziabad, Meerut, Kairana, Saharanpur, Muzaffarnagar, Baghpat and Bijnor have already voted on April 11. While other Others 8 seats of the state is voting today as a part of the Phase-II voting.

While Sultanpur Lok Sabha Seat will go to polls on May 12.