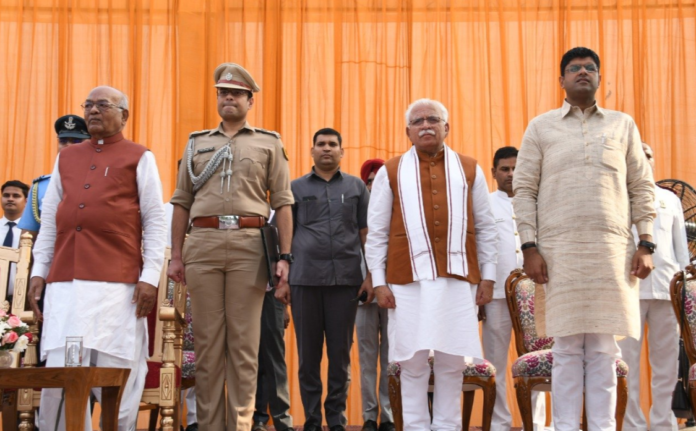 Manohar Lal Khattar took oath as Haryana Chief Minister on Sunday for his second term after the recently concluded polls in the state. Along with him, Jannayak Janta Party chief Dushyant Chautala also took oath as Deputy Chief Minister of Haryana. The oath ceremony took place at the Raj Bhavan.

Manohar Lal Khattar had met Governor Satyadev Narayan Arya on Saturday with JJP chief Dushyant Chautala met to stake the claim for forming the government with the support of 57-MLAs.

On the induction of the new Chief Minister and Deputy Chief Minister in the Haryana state, Prime Minister Narendra Modi congratulated the leaders. Narendra Modi also expressed his faith in both the leaders for working towards the fulfillment of the aspirations of the people of Haryana. He posted a tweeted message conveying the same message-

The tweet read- “Congratulations to Manohar Lal Khattar Ji and Dushyant Chautala on taking oath as CM and Deputy CM of Haryana.”

Congratulations to @mlkhattar Ji and @Dchautala on taking oath as CM and Deputy CM of Haryana.

Best wishes to them as they work to fulfil the aspirations of the people of Haryana.

Finally, with the support of JJP and Independent candidates, BJP was able to claim the majority on Sunday.