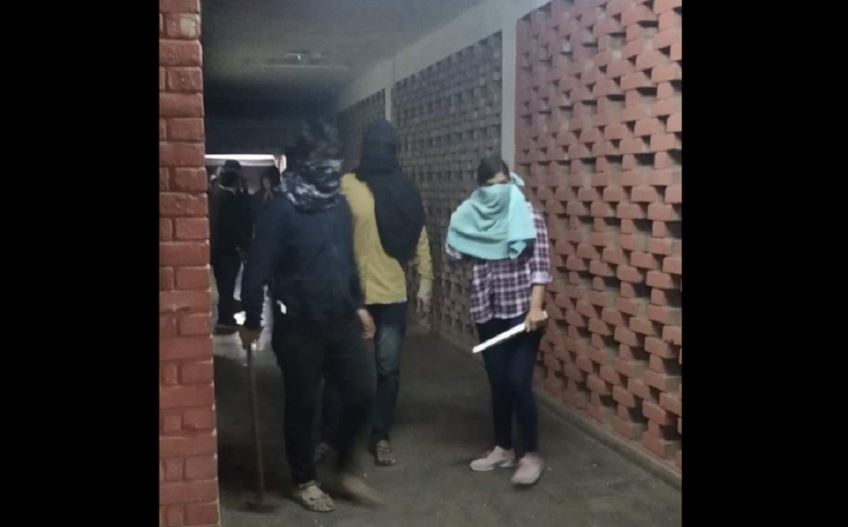 An extremely distressing video emerged on the social media, which showed that a bunch of masked men led by another masked woman threatened and abused the students before the clash broke out. The goons also stormed inside the hostels, pelted stones, vandalized property and beaten up number of students mercilessly. More than 25 students and teachers were wounded, including JNU Students Union president Aishe Ghosh. The injured were shifted to AIIMS Trauma Centre and discharged on Monday morning.

While some students, who were injured in the attack, blamed the Bharatiya Janata party’s student wing, ABVP (Akhil Bharatiya Vidyarthi Parishad) for the violence; The ABVP blamed the left-affiliated students for the same. They alleged that the left-affiliated students had shutdown the server room of JNU causing internet blockage. Sources say that doctors who tried entering the campus to provide first-aid to the students were also targeted and ambulances were stopped at the gate.

The official twitter handle of ABVP said, “Left goons had shutdown the server room of JNU causing internet blockage so as to ensure no student could register for the new semester. It is very clear who is responsible for the violence and brutal attacks on students in JNU.”

A panel has been formed, which includes 2 ACPs, 4 inspectors and eight sub inspectors to probe the incident. The Delhi Police filed an FIR and also met the students and recorded their statements on the same. The cops are also inspecting Whatsapp group chats in which the attack was planned and discussed. Registrar and Pro-VC of JNU already met LG Anil Baijal and apprised him of the situation.

Followed by the violence at JNU, massive protests broke out across the country. Students of various universities have been staging protests, to show their solidarity with the JNU students who were attacked by mobs. Students of Jadavpur University have been protesting in Kolkata, students from multiple colleges gathered at Gateway of India to stage protests, FTII students were also seen staging protests in Pune.

Leaders across political spectrum condemned the attack in the University. While Congress leader Priyanka Gandhi blamed the BJP for the violence, others demanded strong action against the miscreants and swift justice for the students and teachers who were targeted.

Here are some of the reactions of the political leaders:

On the other hand, Aam Aadmi party’s Yogendra Yadav also claimed to be targeted by ‘right wing’ students when he visited the campus.