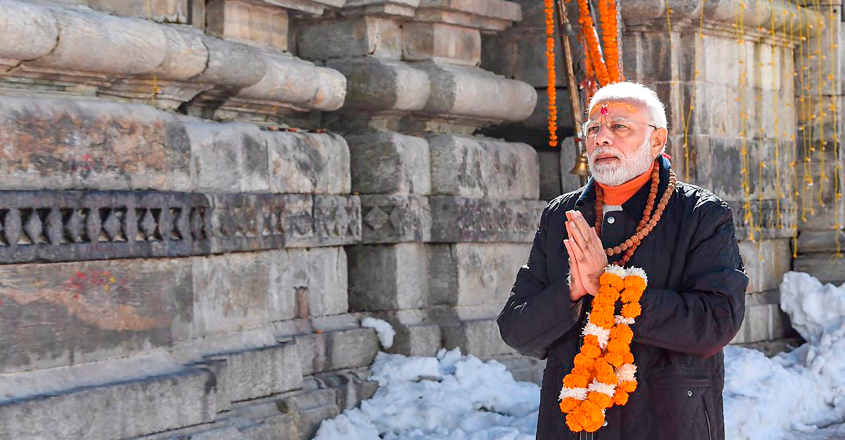 Prime Minister Narendra Modis visit to Kedarnath temple and his meditation at 12,000 ft above sea level in the Garhwal Himalayas was an extraordinary event. It will probably go down in history as the highest level of meditation ever performed by any head of government.

The fact that it happened just after the campaigning ended in the marathon 40-day Indian elections, and just before the counting of votes, made it singularly curious.

Wrapped in traditional Garhwali outfit, Modi was seen walking on the snow-shovelled path with the backdrop of the majestic and imposing wall of the snow-clad Himalayas. Many termed it as serious and inspiring spiritual expedition; others found it full of political motives and even politically unethical. The real hidden message, however, was missed by the Indian media. That message is embedded in the Himalayan background that was clearly visible in the images appearing in media. That showed receding snowlines exposing the rocky walls of the Himalayas due to climate change.

The memories of the havoc caused six years back at the temple site by melting glaciers and flash floods in river Mandakini are as fresh as images of Modi trekking around the Kedarnath temple in May 2019. The Chorabari lake that overflowed and the eruption of the ferocious flow of the river in 2013 were certainly manifestations of global warming.

A review by Modi of the rehabilitation efforts started soon after that climate tragedy conveyed a strong message about the cost and the time needed to rebuild and redevelop the area. That is the message about the damage that could be caused by climate change which was lost on the media which saw everything through a political prism.

Indeed, during the fierce cacophony of the campaign trail and heated debates of a fiercely fought election, the heating of the planet took a back seat. Himalayan meltdown will result in unparalleled human sufferings in the world’s most populated region fed by the Himalayan rivers. No estimate has yet been made of how much snow has been lost in the Himalayas, the way it is done for Antarctic and Arctic, but the risk of a Himalayan meltdown currently poses existential threat to India’s people, development, faith and spiritualism. No amount of farm loan waiver, free electricity and free doles promised during election would address that threat of climate change.

The report published by The International Centre for Integrated Mountain Development (ICIMOD) in 2019, just a couple of months before the announcement of the Indian national election, was revealing. That was the report on Hindu Kush Himalaya ( HKH) Assessment, the first such assessment of impacts of climate change on the ecologically important but fragile region. The HKH is often called the world’s ‘third pole’ as it contains the most ice outside of the
Antarctic and Arctic regions.

The report stated that the HKH region-spread over 3,500 square km across eight countries including India and China is warming faster than the global average. The HKH also provides essential resources, especially water, to over a billion people and feeds the grain baskets of Asia. A third of the glaciers in the HKH ranges will melt by 2100 due to climate change, irreversibly affecting the population of nearly half a billion people in north and northeast India that depends on the water from rivers originating from Himalaya including Ganges.

The dark side of the conclusion of ICIMOD report is that any changes in the HKH region would have a bearing on the Indian monsoon that already shows signs of changes in spread and distribution and, in turn, on the livelihoods ecological systems dependent on it.

A ray of hope lies in drastically cutting global emissions in order to limit global warming to 1.5 degrees centigrade above pre-industrial levels. Though Paris climate agreement aims for limiting the temperature to 2 degrees centigrade, world leaders agreed to attempt a highly ambitious target to limit temperature rise to 1.5 degrees. To achieve that, the world would have to curb its carbon emissions by 50 per cent of 2017 levels by 2030 and then achieve 100 per cent reduction by 2050, according to a summary of IPCC report, released late in 2018.

The grim fact emerging from ICIMOD’s report is that even if carbon emissions are cut, succeeding in limiting global warming to 1.5 deg C, 36 per cent of the glaciers in the HKH will be gone by 2100. If, the world does not act at all on reducing GHG emissions, two-thirds of all glaciers could be gone by the end of the century. About 15 per cent of the glaciers have already disappeared. Once the glaciers have melted and the resultant devastating floods have receded, the rivers would run dry.

The worst news came on the day when Modi was trekking around the Kedarnath temple. The concentration of carbon dioxide, one of the major Green House Gases ( GHGs) in the earth’s atmosphere crossed the historic level of 415 parts per million (ppm) for the first time since the ancient dawn of humanity. That signalled the inaction by the world
community to achieve the target set out in the Paris climate agreement.

But the good news came on the eve of counting of the votes. In the meeting of the council of ministers on May 21, Modi discussed the priorities like inclusive development, nationalism, national security as well as climate change. It is not just the countdown of climate change that Modi is signalling through his walk and talk. He is signalling the button to be pushed for a ‘surgical strike’ to decimate teh enemy of humanity i.e. GHG emission.