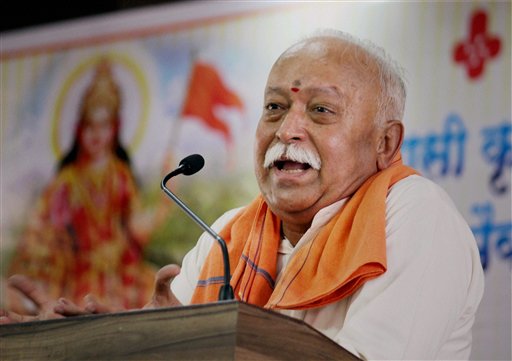 RSS Chief Mohan Bhagwat on Friday urged seers to wait for ‘few more months’ for the Construction of Ram Mandir stating that Issue is at the decisive stage and closing to get accomplished. He reportedly said, ‘We should think positively and have some patience. The country should not lose direction on Ram temple due to impatience’ in Prayagraj. RSS Chief was addressing saints and seers who came from the entire nation to participate in the Vishwa Hindu Parishad‘s two days Dharma Sansad.

In his speech, RSS Chief Mohan Bhagwat said upcoming three-four months are ‘full of turmoil’ because of general elections and any movement apart from praying for Temple would influence the Outcome.

However, as per reports, these remarks of RSS Chief erupted protest and Chaos in the Dharam Sansad. A section of the sant community, notably those from Jaunpur, Ayodhya and Patna, protested after Bhagwat ended his speech without declaring a date for temple construction. They shouted slogans and tried to move toward the stage after which VHP workers evicted them from the pandal.

However, The RSS, VHP and the seers have passed a resolution for Building the Ram Mandir in Ayodhya.

The workers formed a human chain to ensure that the protesting sants did not reach the stage. He also appealed seers to give another chance to Narendra Modi. He added, ‘We have to elect those who will construct the Ram temple. We also need to assess who is making this promise and that this is not being done for just appeasing voters,”.

Earlier on Wednesday launching a parrel movement to VHP on the Ram Mandir Issue, Shankaracharya Swarupanand Saraswati issued direct threats to Centre government declared that they will lay the foundation stone of Ram Mandir on February 21. His declarations came after the end of the three-day long conclave, Param Dharam Sansad, a confluence of Hindu spiritual leaders from across the country, headed by Swami Swaroopanand on Wednesday.