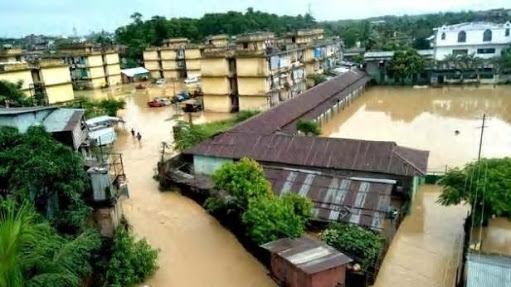 After Kerala, Nagaland faced devastating deluge which led to the death of at least 12 people in a month and over 5000 people have been displaced from their homes, Zee News reported. Chief Minister Neiphiu Rio has sought Central’s aid for the state.

Temjen Toy, Chief Secretary of Nagaland said, “The damage this year is unprecedented in the history.”

Even though the state has suffered from incessant rains and landslides, Nagaland did not hesitate from making a generous contribution of Rs 1 crore to help Kerala recover from the ravaging crisis.

Nagaland State Disaster Management Authority stated that the rains which began in July end created destruction and led to the death of 12 people and more than 3000 families have been displaced in around 400 villages.

CM Rio has requested for ‘an advance amount of Rs 100 crore’ from the Central government to rebuild the road connection severed due to landslides, Zee News reported.

The cause of the flooding was incessant rains which were responsible for the water level rising at the Doyang Hydroelectric project in Wokha District. The excess water was released twice from the dam which led to flooding of the lower regions including Golaghat district of Assam, Hindustan Times reported.

On Saturday, Prime Minister Modi contacted the Nagaland CM and pledged all possible help from the Centre. In his tweet, the PM said, “Spoke to Nagaland CM Neiphiu Rio and took stock of the situation in wake of floods in parts of the state. Assured all possible support to the state in rescue and relief operations. We stand shoulder to shoulder with the people of Nagaland and pray for everyone’s well being.”

This is the Northeast and like everything else in the Northeast, the flood situation also did not get the amount of coverage it deserved. Nagaland is suffering and it needs your help.