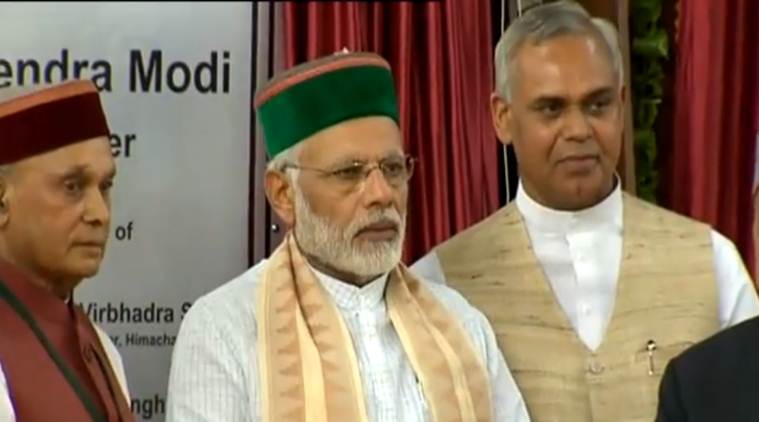 Prime Minister Narendra Modi is on a day-long visit to Himachal Pradesh today where he laid the foundation stone for an AIIMS in Bilaspur.

Prime Minister Narendra Modi is on a day-long trip to poll bound Himachal Pradesh. As the assembly elections are nearing in the state, the political parties have become all the more active in Himachal Pradesh.

Modi, along with the laying of the foundation stone also is on a visit to the state with an intention of luring the people to BJP’s side ahead of the state assembly elections due in Nov, this year. Significantly, the venue of the rally for BJP was also chosen as Bilaspur, which also happens to be the hometown of Union Health Minister J P Nadda, who is likely to be the next Chief Ministerial face from the BJP side.

He said that Himachal has been a land of sacrifice and millions of families of brave soldiers, who gave up their lives ensuring the safety of the nation, lie in the embrace of the state. The Prime Minister further said that he is extremely privileged that he got an opportunity to do something for a state like Himachal Pradesh.

Addressing the huge gathering Modi said that building of AIIMs is not just in the favour of the state but it will also benefit many others.

With the Shilanyas of #IIIT, we are laying the foundations of a futuristic Himachal Pradesh. This will benefit the people of the state: PM pic.twitter.com/OsIKQ9cI4V

He also spoke about the ‘Mission Indradhanush‘ a scheme started by the Central government regarding the immunisation of all the children across the nation. He stressed on the importance of the need of vaccination and said that BJP government has taken up this initiative to vaccinate all the children. He added that the third phase of the scheme will be launched within this week itself in the state and all those who are still left unattended or are vaccinated but incomplete will be taken care of by the BJP members under the Indradhanush scheme.

Modi also urged all the BJP workers, NGO’s, social organisations, political parties and everyone who can contribute, across the nation to unite together and stand as one to achieve the goal of getting 100% children in India vaccinated before Diwali.

Taking a jibe at the ruling Congress government in Himachal, for delaying the steel processing plant project at Khandrori. He said that the departments within the government kept fighting amongst themselves and a project worth only 70 crores was delayed for 7 years. Attacking the ruling government Modi commented that under the Congress in Himachal there is Chief Minister in every department who takes the decision as and when he likes.

The Prime Minister said that at present the condition of Himachal is that, there is a government on bail running the state. Hitting the Chief Minister Virbhadra Singh, he questioned the Congress that all the members of the CM family are out on bail, why is the CM not being changed in the State.

Though, he even congratulated the government officials and the people of Himachal Pradesh for their contribution and achievement in the Swachh Bharat Abhiyan, attaining a clean India. He said that a clean state will attract more tourists and more tourism will only help the state flourish more.

Modi also added that “I thank the media for the coverage of the surgical strike anniversary, it has boosted the strength and morales of the army.” He also spoke about the One Rank One Pension issue saying that “I had announced during the Mandi rally that we will give one rank one pension. We have disbursed 3 out of 4 instalments that have benefitted ex-servicemen. Close to Rs, 8,500 crores has been distributed.”