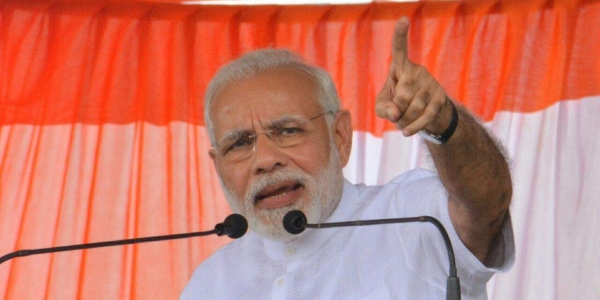 Gangavathi, Koppal: Taking a jibe at the Congress government in Karnataka, PM Narendra Modi said that the 10 per cent commission government of the Congress was replaced with a 20 per cent commission government as the JD(S) had joined hands with it. In his rally in Gangavathi Prime Minister Narendra Modi also slammed Karnataka Chief Minister HD Kumaraswamy for insulting the armed forces by mentioning them as “those who cannot afford two-day meal should join the army.”

In response to this statement, Modi said ,”Your statement only reflects your state of mind about soldiers. Those born with a golden spoon in their mouths will not understand the pride and honour of joining the defence to serve the country. Those who speak ill of our  soldiers should drown and die.”

Karnataka Chief Minister HD Kumaraswamy responded saying “not all who join the defence forces are rich. The PM should not play with the life of jawans to garner votes.”

He attacked the Congress-JD(S) government in Karnataka saying their ‘only mission is commission.’ In another attack he also talked of the dynasty politics carried out by the opposition party.

Slamming HD Revanna, Public Works minister of Karnataka Modi said that HD Deve Gowda stated the same during the 2014 general elections and that he does not take it seriously.