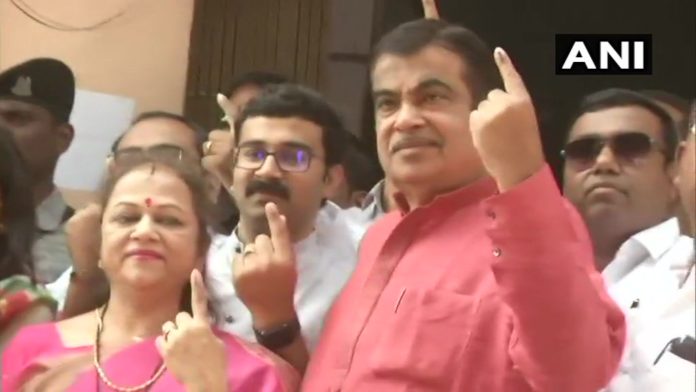 Bhartiya Janata Party Senior Leader and Union Minister Nitin Gadkari who is in fray from Nagpur Lok Sabha Seat, cast his vote today. Gadkari who was accompanied by his family including his wife and two sons arrived at the polling booth at around 10 am.

Union Minister in Narendra Modi‘s Cabinet, Gadkari asserted the confidence of victory with a big margin. He also appeals voters to turn out in large numbers. He said he reached out to the voters with the work done by the BJP government at Centre and people are very happy. ‘They (People) have extended the support, I will win the polls with a big margin’ Union Minister said.

Speaking to media after casting his vote, BJP Leader further said, ‘I am very happy to see a large number of people, young voters coming out in large number to cast their votes, Our India is the largest democracy in the world.

Gadkari who is seeking another term from Nagpur Lok Sabha Seat will face Nana Patole, a former BJP MP who is contesting on Congress Ticket. Gadkari had in 2014 General Elections defeated Congress Vilas Muttemwar with over 2.50 Lakh Votes.

Apart from Gadkari, RSS chief Mohan Bhagwat and its general secretary Bhaiyyaji Joshi were among the early ones to cast their votes in Maharashtra’s Nagpur.

RSS Chief Mohan Bhagwat after casting his vote for the Nagpur parliamentary constituency in the #LokSabhaElections2019: Voting is our duty, everyone should vote. pic.twitter.com/iC8pkirwc5

Maharashtra has a total of 48 Seats and polls in the state will spread across four phases starting from April 11, then on April 18, April 23, and April 29.

The Fight in the state is between Congress who has forged an alliance with NCP in Maharashtra. The Congress-NCP combine will take on BJP-Shiv Sena alliance in the state that sends 48 parliamentarians to the lower house of the Parliament.