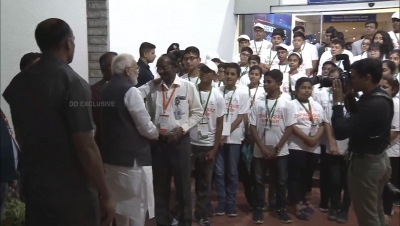 Bengaluru, Sep 7 (IANS) Hours after India lost contact with its moon lander Vikram while descending on early Saturday, Prime Minister Narendra Modi cheered hundreds of Indian space scientists and engineers for their hard work and told them not to lose heart over the setback in the ambitious Chandrayaan-2 mission.

“India is with you! You are exceptional professionals who have made an incredible contribution to national progress. We are proud of our scientists who gave their best to make our country proud,” said Modi in English and Hindi, while addressing the nation from the lunar mission control centre of the state-run Indian Space Research Organisation (ISRO) in this tech hub.

Earlier, ISRO Chairman K. Sivan announced that the 1,471kg Vikram descent was as planned and normal performance was observed up to an altitude of 2.1km from the moon’s surface.

“Subsequently, communication from the lander to the ground stations was lost. Data is being analysed,” Sivan said from the space agency’s Telemetry, Tracking and Command Network (Istrac) in the city’s northern suburb after Vikram broke off from the lunar orbit and was descending to land between two craters near the moon’s south pole.

Exhorting the scientists to rise above the occasion and scale newer heights of success, the Prime Minister said resilience and tenacity were central to India’s ethos.

“In our glorious history, we have faced moments that may have slowed us but they have never crushed our spirit. We have bounced back again and gone on to do spectacular things. This is why our civilisation stands tall,” asserted Modi.

Noting that there would be a new dawn and a brighter tomorrow very soon, the Prime Minister the effort was as important as the final result.

“I can proudly say that the effort was worth it and so was the journey. Our team worked hard, travelled far and those teachings will always remain with us. The learnings from today will make us stronger and better,” he reiterated.

Though the space agency is waiting for Vikram to re-establish contact and hoping it landed “safely” on the lunar surface at the designated spot, the mission’s main spacecraft Orbiter is spinning around the Moon over its north and south poles and is communicating with its ground stations from about 100km above the planet.

The Prime Minister acknowledged the disappointment of the team over the setback as the nation of 1.3-billion people could not see Vikram safe landing and its 27kg rover Pragyan rolling out of it for a stroll on the hard lunar surface.

“If a poet was to write about this (snag), he would mention: “Chandrayaan rushed towards Chandrama to hug her…” said Modi in Hindi , drawing applause from the scientists and engineers.

Boosting the morale of Team Chandrayaan-2, Modi inspired it to march on, saying “you came as close as you could. Stay steady and look ahead.”

Lauding the ISRO staff in the hour of crisis, Modi said the nation and the world would stand by them as true to their nature, they ventured into a place where no one had gone before.

“Our determination to get closer to Moon today, has just got stronger,” the Prime Minister claimed.

When Sivan came to see off the Prime Minister at the centre’s portico and broke down in an emotional outburst, Modi hugged him and consoled him by patting on his back repeatedly.

“You should not lose heart. Do not worry. Be bold and do your best,” Modi is said to have told Sivan in English.

Observing that the country’s determination to land on the Moon has just got stronger despite the setback, the prime minister said the entire nation was awake in solidarity with the space scientists as they had embarked on one of the most ambitious inter-planetary mission.

“We came very close but we will need to cover more ground in the times to come. Every Indian is filled with pride as well as confidence. We are proud of our space programme and scientists… their hard work and determination,” Modi said.

Reminding the ISRO staff that its best was yet to come, the prime minister said there were new frontiers to discover and new places to go.

“We will rise to the occasion and scale new heights of success. The nation is proud of you all for your ambitious attempt to make the mission a success,” said Modi lifting the spirits of the space scientists and engineers.

Modi, who was present at the space centre to watch the historic event, interacted with the space scientists after the mood in the mission control room became gloomy as soon as the telemetry signals stopped from Vikram.

Patting on Sivan’s back, the Prime Minister said: “Whatever you all have done today is no mean feat. I am with you. Be courageous.”