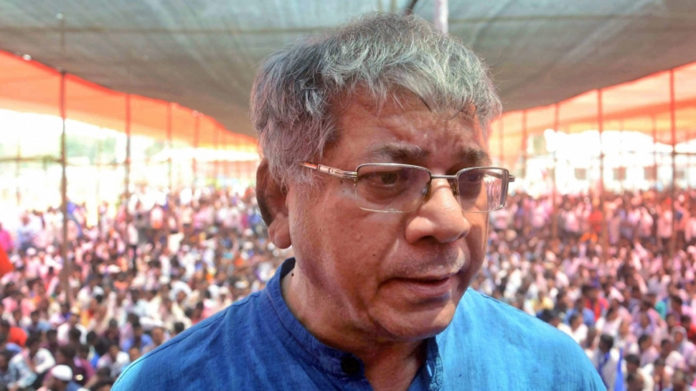 Prakash Ambedkar, grandson of Babasaheb Ambedkar and Bharipa Bahujan Mahasangh Chief has on Thursday booked for threatening the Election Commission. While addressing a poll rally in Maharashtra‘s Yavatmal on Wednesday early this week, he has threatened the poll body and said to put EC behind bars.

Grandson of Babasaheb Ambedkar, Prakash Ambedkar, a Dalit leader, and three-time MP said that he will put EC behind for two days for not allowing the political parties to speak about Pulwama Terror Attack.

FIR registered against Prakash Ambedkar, Vanchit Bahujan Aaghadi (VBA) leader by EC over his statement "…Let our govt come to power, we will not spare the EC. We will keep them in jail for 2 days. The Commission is no more neutral. It is functioning as a BJP aide." (file pic) pic.twitter.com/bWo19M9kCL

Reportedly, Ambedkar said, ‘We have lost at least 40 CRPF in Pulwama Attack, but we have been asked to keep quiet. Election Commission has asked us not to speak on this. How cam EC stop us? The Constitution of the Country has given as the right to speak’.

He added, ‘If I will vote to power, will put EC in jail for two days’

Following which, Yavatmal Collector filed an FIR on Friday. Additional chief electoral officer Dilip Shinde has sought a report from Poll officers in the matter.

However, Ambedkar after the rally said that he ha made the remark in a ‘general way’

The VBA has been offered a seat of Palghar for the mega battle of ballots.