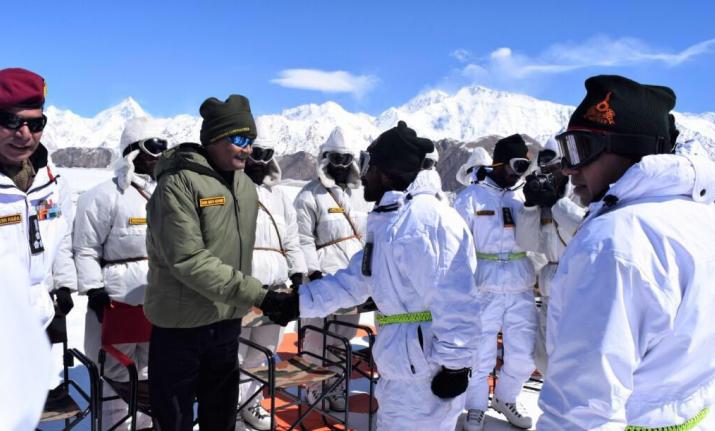 On the 10th of May 2018, President Ram Nath Kovind set out on a visit to the army base located at the highest battlefield of the world. The President visited the Indian troops situated at the Siachen Glacier, which is located in the disputed land of Kashmir, northeast of the point where the Line of Control between India and Pakistan ends. As Supreme Commander of India’s Armed Forces, President Ram Nath showed his gratitude, on behalf of the entire country, to all the soldiers standing at their posts for over 34 years.

President Kovind was accompanied by Lieutenant General Devraj Anbu, GOC-in-C of the Northern Army, and General Bipin Rawat, Chief of the Army Staff. Upon arriving at the Those airfield, the President set out on an aerial survey of the Siachen Glacier, before having a discussion with the troops.

Before addressing the soldiers, Ram Nath visited the Siachen War Memorial, which was established in memory of the 11,000 people who have been killed during their service in the Indian army since 1984. Inside the memorial, the President paid his respects and lay down a wreath to honor the fallen soldiers and officers. The reason behind his visit to this camp was to commemorate the hundreds of Indian soldiers who guard the border with their lives every day, in areas which are 20,000 feet above sea level, and where the temperature drops to -50°C even on good days. Referring to these situations, the President commended the soldiers for their agility, perfect mobilization and constant combat readiness. He spoke about the continuous support and love each and every one of them received from their families, and India as a whole. Ram Nath also invited the soldiers to visit the Rashtrapati Bhavan, if they ever got the chance.

Prior to President Ram Nath Kovind, President APJ Abdul Kalam had traveled to Siachen under similar circumstances in 2004.