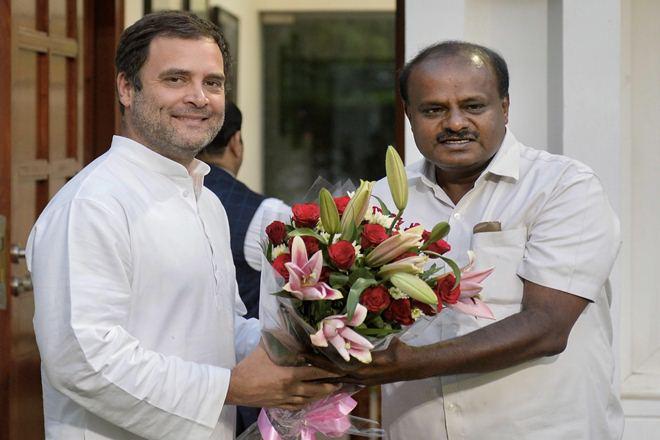 Congress President Rahul Gandhi on Friday gave a thumbs-up to the cabinet expansion of Karnataka. It has been reported that six new faces would be induced in the JD(S)-led coalition government in the state. Also, there is a possibility of the replacement of two ministers.

Four out of the six leaders finalized after thorough discussions among the state leaders in a meeting held in New Delhi are MTB Nagaraj, Raheem Khan, E Tukaram, and P T Parameshwara Naik.

Rahul Gandhi recently gave a nod for the appointment of  V Muniappa as Political Secretary and Ajay Singh as the State Representative in Delhi.

Sources have told that the expansion is being done to pacify the restless Congress leaders over the postponement of the issue.

Karnataka Chief Minister HD Kumaraswamy told the media that JD(S) Supremo H.D. Deve Gowda will decide names of the two legislators to fill the vacancies in the cabinet.

He added that there is no problem in selection of members for the remaining vacant posts.

Tesla CEO Elon Musk Announces Plans To Bring The Electric Car Brand To India By 2021, Accredits Recent Changes In Sales Taxes To Be...