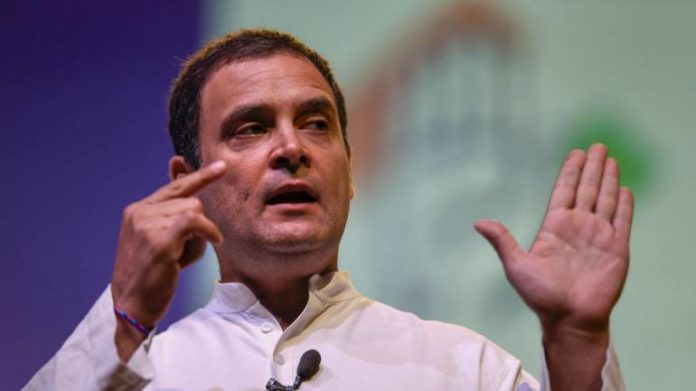 Congress President Rahul Gandhi on Monday announced that his party would ensure minimum income guarantee for every poor in the country if it returns to power after the Lok Sabha polls due in April-May. Rahul Gandhi while addressing at the ‘Kisaan Abhaar Sammelan’ made the remarks held here to express gratitude to Chhattisgarh’s people, particularly farmers, for voting the party to power in the state after a gap of 15 years.

He said, “After winning in 2019 we’ll take a step that no party has ever taken, we will ensure minimum universal basic income for the poor. No government in the world has ever taken such a decision”

#WATCH Rahul Gandhi in Atal Nagar, Chhattisgarh: After winning in 2019 we'll take a step that no party has ever taken, we will ensure minimum universal basic income for the poor. No government in the world has ever taken such a decision. pic.twitter.com/V064QfsWrM

The Congress chief claimed it would be for the first time in the world that such a scheme would be launched by any government in the world.

He accused Prime Minister Narendra Modi and the ruling BJP of trying to create two Indias — “one of the Rafale scam, Anil Ambani, Nirav Modi, Vijay Mallya, Mehul Choksi and the other of the poor farmers”

Chhattisgarh Chief Minister Bhupesh Baghel and senior Congress leader P L Punia were among those present at the event.

The Congress had posted a massive victory in last year’s state Assembly polls, winning 68 of the total 90 seats, while Bhartiya Janta Party was reduced to 15 seats. Ahead of the Assembly polls, Gandhi had assured to waive farm loans if his party was voted to power in the state.

Reacting on the remark, Congress Senior Leader and Former Union Finance Minister P Chidambaram termed it as ‘Historic’. He said “historic” scheme would bring a turning point in the lives of the poor people. Chidambaram said the Congress would release the details of the scheme in its manifesto for the 2019 Lok Sabha elections. “The principle of Universal Basic Income (UBI) has been discussed extensively in the last two years. The time has come to adapt the principle to our situation and our needs and implement the same for the poor. We will explain our plan in the Congress manifesto,” he said.