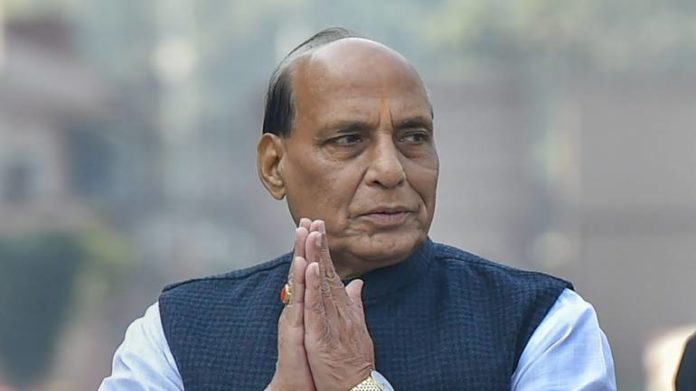 Union Home Minister and Bharatiya Janata Party nominee for Lucknow Parliamentary Seat Rajnath Singh on Tuesday filed his nomination papers for the parliamentary seat for the mega battle of ballots. Union Minister on the occasion held a Roadshow to reach District Collectorate Office.

It was scheduled to take UP Chief Minister Yogi Adityanath along with him, however, UP CM is facing a ban for 72 hours for making controversial remarks and violating model, code of conduct.

The Lucknow parliamentary seat will go to polls on May 6. The last date to file nominations for the prestigious seat is April 18. The Seat had on past represented by Atal Bihar Vajpayee for 5 terms from 1991 to 2009. However, in 2009 BJP’s Lalji Tandon won the Parliamentary Seat. BJP Senior Leader Rajnath had in 2014 won the by defeating Congress Rita Bahuguna Joshi with over 2.50 Lak Votes.

Rajnath Singh is seeking his second term from the seat. The Other Opposition parties Congress and BSP-RLD-SP alliance have not yet announced its Candidate. Samajwadi Party in a poll pact has been offered the Lucknow Seat.

Sources familiar claimed that Akhilesh Yadav may announce the name of Poonam Sinha, wife of Shatrughan Singh from the Seat to take on Union Home Minister. Shatrughan Sinha has recently joined Congress and is contesting polls from Patna Sahib.

Uttar Pradesh capital Lucknow today for the Lok Sabha polls, but he doesn’t have a

Rajnath Singh had in 2009 Lok Sabha polls won from western UP’s Ghaziabad but shifted to Lucknow for the 2014 polls.

Union Minister earlier in the day tweeted, ‘Today I will file my nomination papers from Lucknow parliamentary constituency. I seek the support and blessings of the people to continue working for them and realise Shri Atalji’s dream of making Lucknow a world-class city’.

Today I will file my nomination papers from Lucknow parliamentary constituency. I seek the support and blessings of the people to continue working for them and realise Shri Atalji’s dream of making Lucknow a world class city.

Uttar Pradesh which has a total of 80 seats will go to polls in all seven phases starting from April 11. The Lok Sabha Seats of – Gautam Budh Nagar, Ghaziabad, Meerut, Kairana, Saharanpur, Muzaffarnagar, Baghpat and Bijnor have already voted on April 11.