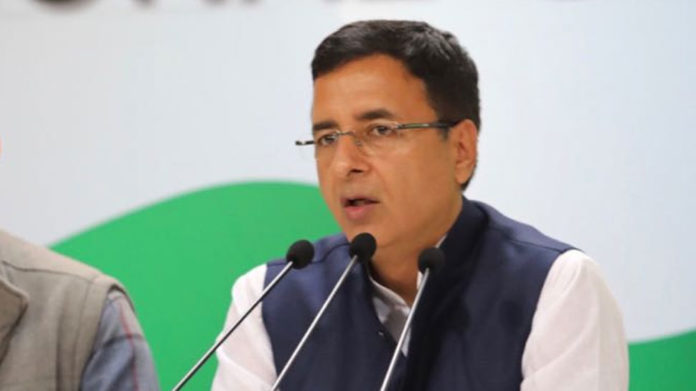 After the Election Commission curtailed the canvassing in West Bengal on Wednesday ahead of the last phase of elections, Congress termed the EC’s decision as a “parting gift to Prime Minister Narendra Modi and Bharatiya Janata Party” and “a dark spot on India’s democracy.”

Addressing a press conference in New Delhi Congress spokesperson Randeep Singh Surjewala said that Election Commission allowed the campaigning till 10 p.m. on Thursday because of the pre-schedule campaigning of Modi in Mathurapur and Dum Dum parliamentary constituency.

A similar statement was made by Mamata Banerjee while she was addressing a press meeting in Kolkata after the EC announced its decision.

Addressing the press conference Randeep Singh Surjewala said that, “EC’s order of curtailing campaign and restricting it to 10 p.m. on May 16 is a dark spot on India’s democracy favoring one political party.” He also added that “the Election Commission of India has regrettably and completely eradicated from its constitutional duties under the article 324 to ensure a level playing field besides negating the due process under article 14 and article 21 of the Constitution of India.”

He also alleged the Election Commission of ordering the decision in favor of Prime Minister Narendra Modi and BJP as the pre-announce election rallies of Modi at Mathurapura and Dum Dum in afternoon and evening or not hit by EC’s order.

“The orders by Election Commission has created a fear psychosis by admitting EC’s inability to hold free and fair elections,” Surjewala added.

Alerting the EC, he said that, “every citizen of India is questioning the Independence objectivity impartiality and fairness of the election commission today.” he said that the time has come when Election Commission should submit them before the people of India instead of being stifled by PM Modi as the democracy is under attack from the ruling Bharatiya Janata Party (BJP).

Alleging the partiality in conducting free polls, Congress leader Surjewala said that Congress party filed over 11 complaints against Prime Minister Modi and Amit Shah but they were given a clean chit by Election Commission.

Lok Sabha Polls 2019: Priyanka Gandhi to hold roadshow in Varanasi on May 15