The Indian Wire » News » Its regrettable Imran khan chose to ‘politicize the pious occasion’, India hits out at Pakistan 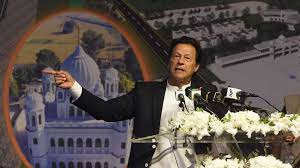 India on Wednesday, attacked Pakistan Prime Minister Imran Khan for choosing to politicize the “pious occasion” at the Kartarpur corridor ceremony, which was focused on the realization of long-pending demand of the Sikh community.

In a statement, Indian external affairs ministry wrote: “It is deeply regrettable that the prime minister of Pakistan chose to politicize the pious occasion meant to realize the long pending demand of the Sikh community to develop Kartarpur corridor by making unwarranted reference to Jammu and Kashmir which is an integral and inalienable part of India.”

The statement also hit out at Pakistan for harbouring its persistence support to terrorism.

The statement further stated: “Pakistan is reminded that it must fulfill its international obligations and take effective and credible action to stop providing shelter and all kind of support to cross border terrorism from territories under its control.”

India’s statement comes ahead of Khan’s speech, where he has cited to take two steps forward if New Delhi took one, in relevance to Pakistan urge to move forward maintaining relations with India. He has also made a reference to India’s Kashmir.

Khan said, “We want to move forward in our relations with India.” He further said, “If France and Germany who fought several wars can live in peace, why can’t India and Pakistan.”

However, earlier external affairs minister Sushma Swaraj has made a statement, where she has said, “Unless and until Pakistan stops terrorist activities in India there will be no dialogue and we will not participate in SAARC.”

Swaraj also said there’s no relevance of Kartarpur corridor with dialogue process between the two countries.