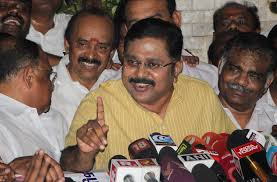 CHENNAI: In a stunning victory sidelined AIADMK leader T T V Dhinakaran today won the crucial RK Nagar bypoll by a thumping margin of over 40,000 votes, Dhinakaran thrashed his nearest rival E Madhusudhanan of the ruling AIADMK by 40,707 votes in the assembly constituency in north Chennai.

TTV Dhinakaran is the nephew of jailed leader VK Sasikala.

This was higher than the margin of 39,495 votes secured by late Tamil Nadu chief minister J Jayalalithaa last year in the segment in the assembly elections.

The bypoll necessitated by the death of the AIADMK supremo on December 5 last year was held on December 21 and the votes were counted today.

Commenting on his win, Dhinakaran said it showed that he has the support of “Amma’s (Jayalalithaa’s) followers”.

The AIADMK alleged there was a ‘tacit understanding’ between DMK and Dhinakaran to defeat the ruling party.

DMK attributed the victory to money power and said it was a “Himalayan defeat for the Election Commission rather than the DMK candidate”.

The EC had made elaborate arrangements and deployed nine observers, considered the highest for a single assembly constituency segment, to monitor the poll.

Contesting as an independent on ‘pressure cooker’ symbol after losing the battle for AIADMK’s ‘Two Leaves’ to EPS-OPS camp last month, Dhinakaran secured 89,013 votes, about 50 percent of the 1,76,890 votes polled.

E Madhusudanan, who sided with now deputy chief minister O Panneerselvam when the latter revolted against Sasikala in February, came second with 48,306 votes. Polling in RK Nagar was held on December 21.

DMK’s N Maruthu Ganesh came third with 24,651 votes, in the process losing the deposit, as also 57 others, including the BJP nominee who could manage only 1,417 votes.

Dhinakaran’s victory is seen as a shock to the AIADMK which was expected to retain the seat in view of the EC allowing it the Two Leaves symbol beside being in power.

The bypoll was considered an acid test for the AIADMK being the first in the post-Jayalalithaa era.

The outcome is expected to intensify the internal feud and may well alter the power equations in AIADMK with some functionaries, including an MP, reportedly giving subtle indications for a patch-up with Dhinakaran.

The sidelined leader has been vowing to unseat Palaniswami after he revolted against him and Sasikala and teamed up with Panneerselvam earlier this year.

Eighteen AIADMK MLAs loyal to him were disqualified by the Assembly Speaker after they met state Governor and expressed lack of confidence in the Chief Minister in August. A petition challenging the disqualification is pending in court.

It would also be a disappointing verdict for DMK, which pitched for a decisive win that could be a marker for regime change.

The main opposition party was supported by its allies including the Congress, IUML and several other friendly outfits like the Left parties and the MDMK.

Jayalalithaa was elected from the RK Nagar seat in north Chennai first in 2015 and later in 2016.

Winning as an independent, Dhinakaran has set a new record in Tamil Nadu. The last time an independent won in the state assembly/Lok Sabha polls was way back in 1991 when R Tamaraikani got elected from Srivilliputtur.

Dhinakaran was appointed party deputy general secretary by his aunt Sasikala when she went to the Parapana Agrahara Jail in Bengaluru to serve a four-year jail term in a disproportionate assets case in February this year.

After the merger of Palaniswami and Panneerselvam camps, an AIADMK general council meeting in September had annulled the appointment of Sasikala as the party general secretary and all appointments/removals made by her, including that of Dhinakaran.

Unfazed, 54-year old Dhinakaran, who along with his aunt Sasikala had been working with late AIADMK chief J Jayalalithaa for about three decades, moved on confidently and continued to meet his supporters in all the districts.

On his win, Dhinakaran said, “it is Amma’s constituency. After her demise… I will continue her work in the constituency.”

He told reporters here that he was a “follower of Amma’s path” and has the “support of her followers.”

When asked about the possibility of a patch-up with Palaniswami and Panneerselvam, he said all decisions will be taken only after consultations with party leaders and finally the “party chief” Sasikala.

On indications that a Lok Sabha MP may join hands with him, he said,”I have told you before, they have gone there (EPS, OPS camp) saying they will return.”

Earlier in the day, he visited the mausoleum of Jayalalithaa and prostrated there. He also paid tributes at the ‘samadhi’ of party founder M G Ramachandran as well.

Reacting to Dhinakaran’s win, Palaniswami and Panneerelvam, who is the AIADMK coordinator and Coordinator respectively, said it was achieved by a ‘tacit understanding’ between the DMK and Dhinakaran.

AIADMK senior leader and Minister D Jayakumar said “this is not a victory…this is not a permanent win, deceiving the people is easy.”

DMK working president M K Stalin too alleged role of money power and said,”it will be appropriate to say that the outcome is a Himalayan defeat for the Election Commission rather than the DMK candidate.”