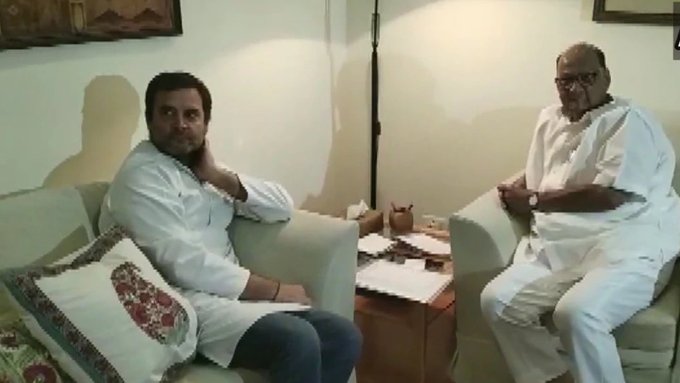 New Delhi, May 30 (IANS) NCP chief Sharad Pawar and Karnataka Chief Minister and JD-S leader H.D. Kumaraswamy on Thursday met Congress President Rahul Gandhi at his residence and asked him to not to give up his party post following the Congress rout in the Lok Sabha elections.

According to Congress leaders, Nationalist Congress Party (NCP) chief Pawar arrived at the residence of the Congress President and held a meeting for over 25 minutes. It is learnt that the two leaders discussed their parties’ dismal performance in the recently concluded Lok Sabha elections.

Rahul Gandhi will also be Meeting Manmohan Singh after this.

Important: RG has not been meeting any leader from his own party in the wake of his offer to resign.

This meeting is important wrt Congress-NCP in Maharashtra pic.twitter.com/Hu9ucPXkoe

Party leaders said that Pawar also asked Gandhi to take back his offer of stepping down from the party’s top post.

Earlier in the day, Kumaraswamy also met Gandhi at his residence and requested him not to give up his party post.

“I have requested Rahul Gandhi not to step down from his post,” the Janata Dal-Secular leader told reporters after the meeting. He also said that he had also apprised Gandhi about the political developments in Karnataka.

He also said that he will attend the swearing-in ceremony of Prime Minister Narendra Modi in the evening.