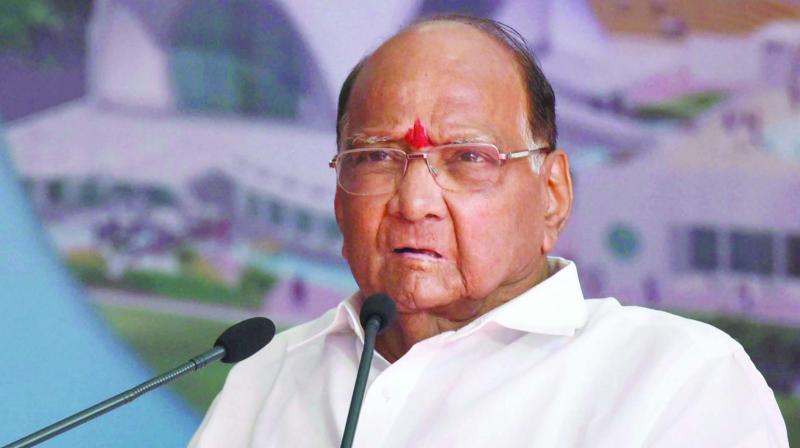 Nationalist Congress Party (NCP) Chief Sharad Pawar taking a swipe U-turn on Monday announced that he will not contest the upcoming Lok Sabha Polls. NCP Chief had in February last month created a political Buzz by announcing his return to active Politics. However, he did a U-Turn and said on Monday that he has changed his mind and has decided not to contest the Polls.

While addressing the presser NCP Boss as quoted saying by ANI, “I thought that already two members of my family are contesting polls this time and hence I felt this is a right time to take a decision to not contest since I already have contested 14 times in the past”

NCP Chief Sharad Pawar: I thought that already two members of my family are contesting polls this time and hence I felt this is right time to take decision to not contest since I already have contested 14 times in the past pic.twitter.com/Q7ElDQqXte

My Daughter, Supriya Sule is already a member of the Lok Sabha, she currently represents a family bastion of Baramati Lok Sabha Seat while sources claimed that other member he is referring to his grandnephew Parth Pawar, son of NCP Leader Ajit Pawar.

Pawar in the press Conference further revealed that most of the party workers want Parth to contest from Mawal Lok Sabha Seat. He added that the New generation should be given a chance now.

Ajit Pawar, nephew of NCP Chief Sharad Pawar is an MLA and Former Deputy Chief Minister of Maharastra. While the son of Ajit Pawar and Grand Nephew of Sharad Pawar, Parth Pawar,  is an aspiring young Politician.

Earlier on February 20, Sharad Pawar declared that he will contest the upcoming Lok Sabha elections due for April-May this year, while his nephew Ajit Pawar and some other family members will not contest.

Sharad Pawar had represented the Solapur district constituency from 2009 to 2014, following which he chose to go into the Rajya Sabha, stating that he wouldn’t return to the lower house of Parliament.

NCP for the General Elections 2019 had stitched an alliance with Indian National Congress to take up BJP –Shiv Sena combine for the Lok Sabha. Sources claimed that Congress is expected to get a lion share in seat sharing with Rahul Gandhi led a party expected to get 26 seats while NCP may settle for remaining 22 seats.