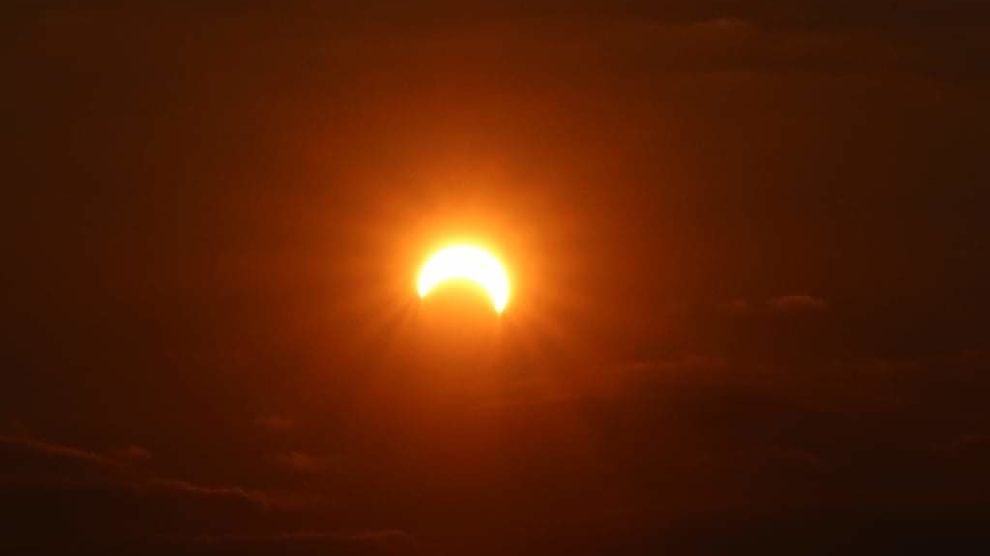 Prime Minister Narendra Modi on Thursday said that he was unable to enjoy the last Solar eclipse of 2019 that was to be partially visible from the national capital due to a “cloud cover”.

Unfortunately, I could not see the Sun due to cloud cover but I did catch glimpses of the eclipse in Kozhikode and other parts on live stream. Also enriched my knowledge on the subject by interacting with experts. pic.twitter.com/EI1dcIWRIz

The Prime Minister, an ardent science enthusiast, could only manage a glimpse.

“Like many Indians, I was enthusiastic about Solar Eclipse 2019. Unfortunately, I could not see the Sun due to cloud cover but I did catch glimpses of the eclipse in Kozhikode and other parts on live stream. Also enriched my knowledge on the subject by interacting with experts,” Modi tweeted, attaching the pictures of himself trying to view the annual solar eclipse through the special ultra violet protection eye glasses and images of live stream from Kozhikode.

PM Modi was all sports when a twitter user tried to troll with a picture. He wished the twitter user, who goes with the username GappistanRadio, to go ahead with the memes that were coming.

People of Delhi woke up to thick fog looming over the city with visibility of about 700 meters at 8.30 a.m. which deprived them of a glimpse of the solar eclipse.

According to scientists, the solar eclipse was expected to be fully visible only in the southern states of India. People from Karnataka, Kerala and Tamil Nadu were able to see the eclipse, while the rest of the country was able to see a partial solar eclipse.

Solar eclipse occurs when the Moon passes between the Earth and the Sun, totally or partly obscuring the Sun for a viewer on Earth.

An annular solar eclipse takes place when the moon’s apparent diameter is smaller than that of the Sun’s, blocking most of the Sun’s light. This causes the Sun to look like a ‘ring of fire’.

FIR against 1000-1200 AMU students for candle light protest on campus
Solar Eclipse : How PM Narendra Modi won the internet with his perfect reply to a troll
Comment