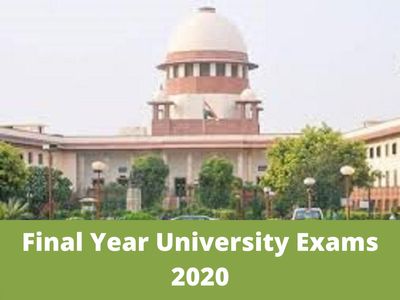 Today, in the opposition to the University Grants Commission (UGC) guidelines, the Supreme Court adjourned the hearing allowing universities to conduct their final year exams in the wake of the COVID-19 pandemic.

A total of 31 students from all over India, moved the Supreme Court, seeking to undermine the circular released by UGC requesting universities to hold final year exams by 30th September, 2020.

The University Grants Commission (UGC) refused to agree to the revocation of examinations in its reply to the averages made by the state governments. It had submitted its affidavit to the Supreme Court yesterday.

UGC also reported that they are proactively handling the pandemic’s situation by different means, including the issuing of recommendations such as those of 29th April and 06th July.

They further argued that it addressed the issues surrounding the emerging pandemic situation by:

A.providing ample time to complete the final year exams by the end of September, using the prescribed ‘COVID -19’ guidelines and procedures;

C.Providing candidates who because of any reason might be unable to appear for exams administered by a university/institution by the end of September, 2020, for an assessment by a special opportunity.

The UGC had asked all state, central and private universities to tell them about the status of the examinations and by 22nd Julu, had submitted their answers.

Notwithstanding the UGC recommendations, several states, including Maharashtra, have agreed not to conduct formal exams. But a former teacher challenged the Maharashtra order in the Bombay High Court. The UGC had subsequently said in its affidavit to the Bombay High Court that the state government had no right to cancel the examinations.

The 29th April appraisal guidance for final year student, had proposed that universities administer exams in offline or online format, while it was recommended that first and second year students be promoted on the basis of internal evaluation and results in the previous semester/year. This also suggested, however, that if a student is not happy he/she should be given an incentive for change until the condition is stabilized. The final-year exams were set from 1st July to 31st July.

The Delhi and Maharashtra governments had filed a petition in the Supreme Court that they will not hold examintions due to the pandemic.

Abhishek Manu Singhvi, who is appearing in this matter for a law student told the Apex Court that this is a matter of life and safety and further argued that states such as Maharashtra, Delhi, Punjab, West Bengal, Rajasthan and Odisha had opted not to hold examinations.

Shyam Divan, who is appearing for Yuva Sena said that the UGC had sensitivity and versatility in its earlier guidelines. He added that this cannot be made mandatory particularly when a few colleges have become quarantine facilities in Maharashtra.

The Supreme Court, therefore, will hear the plea next, against conducting the final year exams of the UGC mandatory on 18th August.