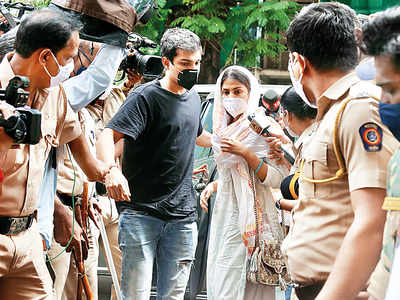 Synopsis: After filing a petition for transfer of her case to Mumbai, at the Supreme Court, Actress Rhea Chakraborty filed an affidavit allegedly about the ongoing ‘media trial’ upon her.

Actress Rhea Chakraborty filed a fresh affidavit in the Supreme Court on Monday, arguing that the ongoing ‘media trial’ against her in the Sushant Singh Rajput death case, should be halted. She also alleged that the investigation is still going on but the media have harshly implicated her in the case. She also claimed in her affidavit that she has no opposition if the Apex court would shift the investigation to the Central Investigation Bureau (CBI) in the Sushant Singh Rajput case. She has said that the media was targeting her ‘injustifiably.’

The actress is one of the prime suspect, along with her parents and brother Showik Chakraborty, in a FIR filed by Sushant’s father, KK Singh. She has been charged of abetting the suicide of late actor Sushant Singh Rajput. Rhea and her family have also been summoned by the Enforcement Directorate under the Prevention of  Money Laundering Act for the second time since, KK Singh had also accused Rhea of stealing Rs 15 crores from the account of Sushant Singh Rajput.

Chakraborty, in her 11-page affidavit, said that she should not be made “scapegoat of political interests” in the death case of Rajput. She also alleged that the case was “made out of proportion in the media” in the wake of the forthcoming elections to the Bihar Assembly.  Chakraborty further claimed that she had already been “convicted by the media” in this matter long before any foul play was identified.

She also alleged in her affidavit that media had accused the defendants in “similar manner” in 2G spectrum allocation case and the Aarushi Talwar case but they were later declared innocent by the courts.

Earlier this day, in the money laundering case connected to Rajput’s death, Chakraborty and her family members appeared before the Enforcement Directorate for a fresh round of questioning in connection with the investigation. She was earlier interrogated by the ED in connection with the case, for about nine hours on Friday.

ED questioned the actress on her relationship with the late actor Sushant Singh Rajput, alleged commercial interests and the developments that have taken place between them over the last few years. Earlier, the actress was summoned by the ED, along with her brother, Showik, chartered accountant Ritesh Shah and Sushant Singh Rajput’s former manager, Shruti Modi. Rhea and Showik were called up again, though, because of their “evasive responses.”

Rhea had pleaded, through her lawyer Satish Maneshinde, that the ED summon be delayed until the Supreme Court hearing, which was, howvever, been refused. She had submitted a petition in the Apex Court, requesting the transfer of the FIR lodged against her by Sushant’s father, from Patna to Mumbai.

The CBI however, on Thursday took over the investigation into the death case of Sushant Singh Rajput and re-registered the FIR lodged with the Patna Police, linked to suspected criminal conspiracy and  abetment to suicide against his rumored girlfriend Rhea Chakraborty and members of her family, officials said on Thursday. A special investigative team under Superintendent of Police, Nupur Prasad will probe the case and will be supervised by DIG Gagandeep Gambhir and Joint Director Manoj Shashidhar, both senior IPS officers from the Gujarat cadre, they said.

With respect to Rhea’s petition, the Supreme Court has reserved its verdict and the next date for hearing is scheduled for Thursday, on 13th August, 2020.