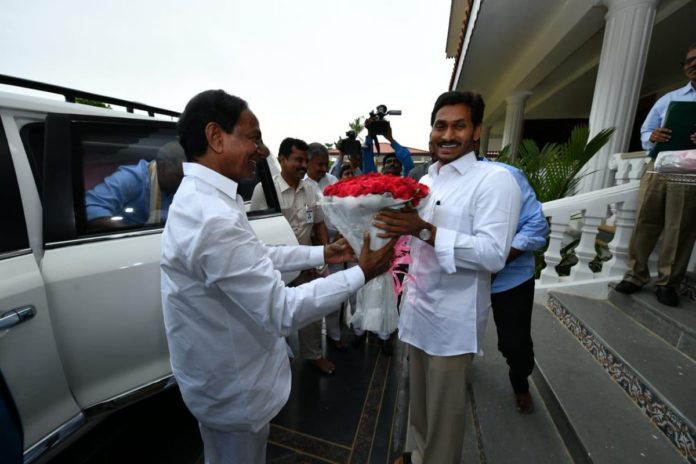 ‘Chief Minister Sri Kalvakuntla Chandrashekhar Rao invited AP CM Sri Jaganmohan Reddy @ysjagan to be the chief guest at the inauguration of the Telangana Varaparadani Kaleshwaram project which will be launched on the 21st of this month’, tweeted Telanaga Rashtra Samithi sharing the picture of the meeting.

Later, he reached Andhra CM’s Official Residence in Amaravati and extended the invitation to attend the mega inauguration ceremony of the Kaleshwaram Lift Irrigation Project (KLIP).

Reported both the bigwigs discuss the issue related to Andhra Pradesh Reorganization Act, 2014. Among the other issues discussed by the Chief Ministers include the division of resources post-bifurcation, division of public sector utility and division employees in the power sector.

The total estimated cost of the project is ₹80,500 crore and is the costliest project undertaken by the state.

The Kaleshwaram Lift Irrigation Project is aimed to irrigate 7,38,851 hectares of Land and will benefit the areas of Karimnagar, Nizamabad, Warangal, Medak, Nalgonda, and Ranga Reddy Districts.