Port Blair: The Union Ministry of Defence on Friday said that Andaman and Nicobar Command has accomplished yet another milestone by conducting the first-ever Tri-Services Para Jumping and Freefall skydiving training course at Air Force Station Car Nicobar. The course was conducted by the Indian Air Force which trains personnel of the Indian Armed Forces.

During the Joint para jumping and skydiving course with participants from the Indian Army, Indian Navy, and Indian Air Force, a total of 267 jumps were undertaken within a short span of 04 days, and a total of 31 persons qualified for the basic and advanced course. The participants of the basic course earned Para Wing, informed the ministry.

The training course was a great success and of historic significance for the Command to wars enhancing the joint manship and operational capability.

The Integrated Tri-Services Command aims to unite the resources of the three defense services of India under one command to protect the air space of the country. The air defense set-up of the Army, Air Force, and Navy would integrate to provide air defense cover to the country.

Lt Gen Podali Shankar Rajeshwar has taken over as the 14th Commander-in-Chief of the Andaman & Nicobar Command (CINCAN), officials said on Monday. A graduate of the Indian Military Academy (IMA), Dehradun, he was commissioned into the Regiment of Artillery in December 1980.

The Andaman and Nicobar Command (ANC) is the first and only tri-service theater command of the Indian Armed Forces, based at Port Blair in the Andaman and Nicobar Islands. It was created in 2001 to safeguard India’s strategic interests in Southeast Asia and the Strait of Malacca by increasing the rapid deployment of military assets in the region. It provides logistical and administrative support to naval ships that are sent on deployment to East Asia and the Pacific Ocean. 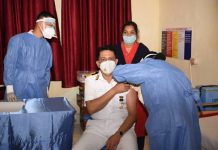