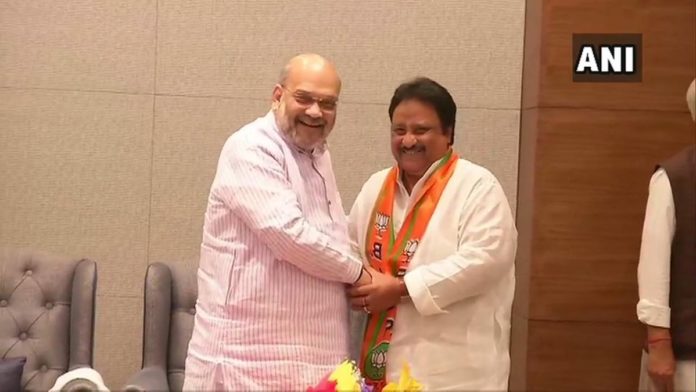 In a major blow to K Chandrashekhar Rao‘s Telangana Rashtra Samithi (TRS), its outgoing MP from Mahabubnagar and Leader of the party in Lok Sabha A.P. Jithender Reddy on Wednesday shifted loyalties back to Bharatiya Janata Party (BJP) after his name was dropped by the TRS for the upcoming Lok Sabha Polls 2019.

Reddy had in 2014 General Election defeated Congress‘ Jaipal Reddy Sudini with a slim margin of around 3000 votes. He had in 1999 elected to Lok Sabha from the same seat on BJP ticket. However, at the peak time of Telangana Bifurcation movement, he joined TRS and elected as TRS MP from the same seat in 2014.

TRS in a run-up to the General Elections 2019 has replaced Reddy with Manne Srinivasa Reddy. Reportedly, the party has dropped him after many of its candidates in during Telangana Assembly Elections have complained him of non-cooperating.

This is the second setback for Telangana ruling party. Prior to this, its former minister D K Aruna jump shift to join Bharatiya Janta Party ahead of the crucial Lok Sabha Polls 2019. He joined the party in the presence of BJP President Amit Shah, JP Nadda and Others in national Capital. The Saffron party has pitched him against Maloth Kavitha from Mahabubabad Parliamentary Seat.

Bhartiya Janta Party in a run-up to the general elections 2019 has already announced all its candidates in Telangana that will go to polls in the first round of voting on April 11.