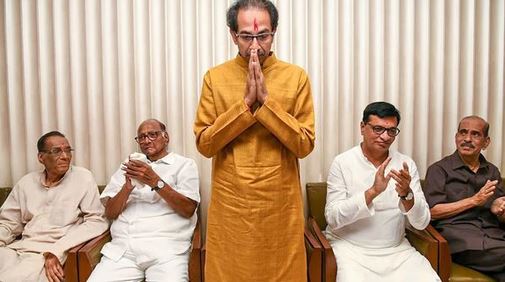 First thing after taking oath as the Chief Minister of Maharashtra on Thursday, state cabinet led by Uddhav Thackeray announced to allot Rs. 20 crore for the development of Raigad, the capital of Chhatrapati Shivaji Maharaj.

After the cabinet meeting, Nationalist Congress Party leader Jayant Patil informed the media of constituting a coordination committee to lead the three-party government to achieve its objectives and goals.

On being asked about the government formation, he said, “I think the government which Maharashtra people wanted has formed now. In the first meeting itself, the Chief Minister has ordered to get the report related to farmers.” The leader further said that the state’s chief secretary has been directed to analyze the economic situation of farmers.

The leader also said gave a vacillating answer on the question of Deputy Chief Minister. He said that only NCP supremo Sharad Pawar will take the final call on it. As quoted by ANI, he said, “Sharad Ji is the final authority and whenever he makes up his mind the decision will be announced.”

Shiv Sena leader Uddhav Thackeray took the oath as Chief Minister on Thursday evening as the18th Chief Minister of Maharashtra. Along with him, six other leaders from Shiv Sena and NCP were also sworn-in at the Shivaji Park in Mumbai.