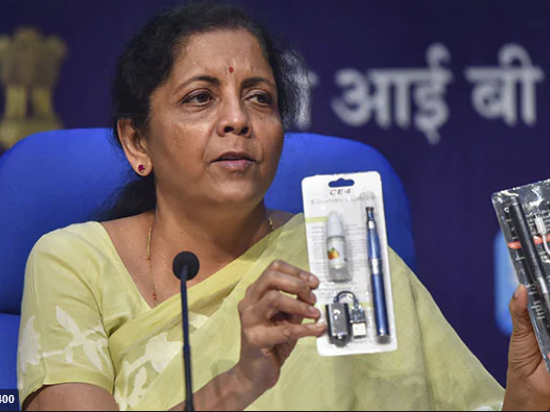 With an aim to De-addict the younger population, the Government of India announced a complete ban on e-cigarettes on Wednesday. While announcing the decision, Finance Minister Nirmala Sitharaman said that the habit of smoking e-cigarettes affected youth the most.

According to the latest notification on the matter, any kind of production, manufacturing, import/export, transport, sale, distribution, and advertising related to e-cigarettes are completely banned. Nirmala Sitharaman explained that the decision has been taken to promote a healthy lifestyle among the Indian population.

E-cigarettes are battery-powered devices that heat the liquid into an aerosol. It uses a heating element to vaporize liquid nicotine, which is then inhaled by the user. These products entered the market formally in 2003 and since then their circulation has been on the rise consistently.

Finance Minister told the media that E-cigarettes are being encouraged as a way to get people out of their smoking habits. However, reports have pointed out the fact that many people are not using it as a detaching mechanism but are getting hooked onto it. The leader also apprised the public about the market of e-cigarettes. She told that around 400 different brands of e-cigarettes exist and they come in almost 150 flavors. India currently manufactures none of it.

It has been announced that any individual having the stock of e-cigarette needs to declare and deposit it with the nearest police station. Because if found guilty, then an individual will be imposed with heavy punishment. As per the draft rules, storage of e-cigarettes will be fined with Rs. 50,000 or imprisonment up to 6 months or both.