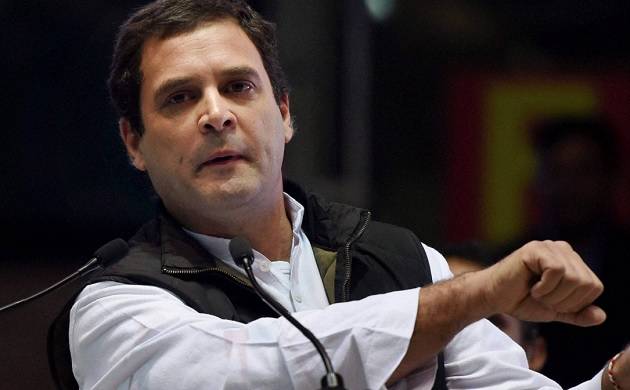 Rahul Gandhi took jibes at the BJP and the Narendra Modi as he spoke on the issue of India at 70 at the University of California, Berkeley.

Congress Vice President Rahul Gandhi is on a two-week tour to the US. During his two-week tour, Rahul will be holding meetings with academics, researchers and intelligentsia and discuss issues like emerging technologies, including Artificial Intelligence, nano technology and biotechnology.

Rahul on Tuesday morning addressed the gathering at the University of California, Berkeley. He spoke about the India at 70 and attacked the ruling BJP led by Prime Minister Narendra Modi. He began with the narration of the incident of the December 2004 tsunami in India. He said that when the Tsunami struck India a tribal person from Andaman and Nicobar Islands said that when the tsunami comes, the sea goes out and a huge number of fish get stranded. “Therefore, the tribals knew that when a tsunami comes, the sea goes out. When the tsunami came, all the non-tribals went out to get the fish. Some of the tribals went to the non-tribals and told them not to go. And that’s why no tribals died,” said the Congress vice-president.

Taking a jibe at the Modi government Rahul said that everyone knows that something has gone wrong. Giving the example of the non-tribals who went to get the fish and dies he said that the “Right-wing politicians are telling people to go and pick up the fish… But you’re not going to get simple answers.” Rahul further added that the idea of non-violence is in danger today and being a liberal, that is what he feels. The Congress vice president continues that the only way to cure a person having negative thoughts is to fill him with love and compassion.

The Congress vice president continues that the only way to cure a person having negative thoughts is to fill him with love and compassion. He said that if the suffering person is tried to heal using violent methods than the disease of violence is only going to spread. He added that the philosophy of nonviolence which took pace in India has now spread its wings far beyond the country. “Non-violence is hard work. It is this idea that is viciously under attack today,” Rahul said.

Attacking the ruling BJP Rahul recalled the incident during Rajiv Gandhi’s time he said that “When Rajiv Gandhi and Sam Pitroda spoke about bringing computers to India, a leader of the BJP who became prime minister of the nation said, What do we need computers for?”

Talking about the India at 70 and its journey of development Rahul proudly boasted that there is no democratic country in the entire world like India that has peacefully raised as many people out of poverty as India.

Talking about the condition of the economy and jobs in India Rahul pointed out that the growth of India does not mean anything until it does not have ample jobs. He said that the main challenge for India currently is creating jobs. “Roughly, 12 million people enter the job market every year… India does not have and nor does it want China’s coercive instruments,” he said. Criticising the Modi government he said that currently, the government at the Centre was only paying attention only to top 100 companies in India, while the need of the hour is to turn and promote the small and medium companies in large numbers. He alleged that the big businesses are protected by their deep pockets.

The Congress leader, during his speech, spoke about the immense potential and talent that India possesses. He said that “We have experts in every single field. Currently, we are not producing enough jobs. 30,000 new youngsters are joining the job market every day and yet, the government is creating just 500 jobs every day.”

Rahul Gandhi further underlining the enormity of the government said that under the Modi government India has lost its freedom of speech and expression. Referring to the recent murder of the activist-journalist Gauri Lankesh he said that liberal journalists are being shot and the Muslims are being killed. “What can destroy our momentum is the opposite energy: Hatred, anger and politics of polarisation, which has raised its ugly head in India today,” said Rahul.

Attacking the Modi government on its action of demonetization while addressing the gathering Rahul said that the policies applied by the government to ban the old currency the implementation of GST has created a havoc in the Indian economy. He continued that millions of people became jobless after demonetization and the farmers were hit hard, enormously raising the number of farmer’s suicide in the country. He added that the decision of banning the old notes of Rs 500 and 1000 on Nov 8 by Prime Minister Narendra Modi, resulted in a loss of 2 percent in GDP.

After the Congress Vice President concluded his speech, he was questioned that what his party was doing to overcome the problems and get the throne back at the centre. He replied that Congress as a party had been in rule for continuous 10 years and for any party to face problems and issue after being in power for so long was natural. He further added that unlike the BJP and the RSS, Congress is basically a conversation. Rahul alleging the ruling government in India said that all the schemes BJP was implementing were originally the ideas proposed by the Congress. “If you look at most of the things BJP is doing, they are things we said. The central architecture is that they borrowed from us. But that architecture does not work now because we know it stopped working,” he said.

Replying to the questions raised on the anti-Sikh riots in 1984, the Congress leader said that he strongly condemns violence against anybody and is with them in their quest for Justice. “I lost my father and my grandmother to violence. If I don’t understand violence, who will?” he said.

I am with them in their quest for justice, violence again anybody I strongly condemn: Rahul Gandhi on '84 riots pic.twitter.com/AQ8qXb4HXc

Rahul nervously addressing the question of dynastic politics in India said that this problem is faced by many political parties in India. Akhilesh Yadav is a dynast. (MK) Stalin is a dynast… Even Abhishek Bachchan is a dynast. Don’t go after me because the entire country is running like that. That’s what happens in India. ” he said.

Most of the country runs like this, so don't go after me, Akhilesh Yadav a dynast, Mr Stalin a dynast,Mr Dhumal's son a dynast:Rahul Gandhi pic.twitter.com/eIDsvnlxtp

Rahul also admitted that during 2012 the Congress party had become arrogant and had stopped talking to the public. When questioned about the remarks made by other about Rahul being reluctant Rahul directly attacking the BJP party alleged that a special BJP team of around 100 members are telling everyone that Rahul is reluctant and stupid. He added that “You’ve seen me now. You make up your mind. This operation is basically run by the gentleman running our country.”

There is a BJP machine,about 1000 guys sitting on computers&telling you about me: Rahul Gandhi on question of being a reluctant politician pic.twitter.com/JzyJj6CU6c

Discussing the political machinery in India Rahul said that the Lok Sabha and the Rajya Sabha has now become weak and are not empowered as they used to be or they should be. “Laws in India are made by ministers and five or six people surrounding the ministers. To me, 546 people in Lok Sabha should be 546 institutions,” he said. When questioned whether he would become the President of Congress, Rahul replied that he was ready to take up the responsibility but the decision was not his.

“PDP was the instrument that brought Kashmiri youngsters into the political space. The day Mr Modi made an alliance between PDP and BJP, he destroyed PDP as an instrument for bringing youth into the political space,” he said. Blaming the ruling BJP the Congress leader said that it is because of the Modi government that today space has opened up for not only the Pakistanis in Jammu and Kashmir but also the terrorists.

So he(PM Modi) massively opened up space for the terrorists in Kashmir, and you saw the increase in violence: Rahul Gandhi pic.twitter.com/mJCMrDy5eO

Concluding. Congress Vice President Rahul Gandhi accused the Indian Prime Minister Narendra Modi to be a dictatorial leader. He said that Modi does not even hold a conversation with people he works with and even a few members of the ruling party and some of the MPs have admitted this.