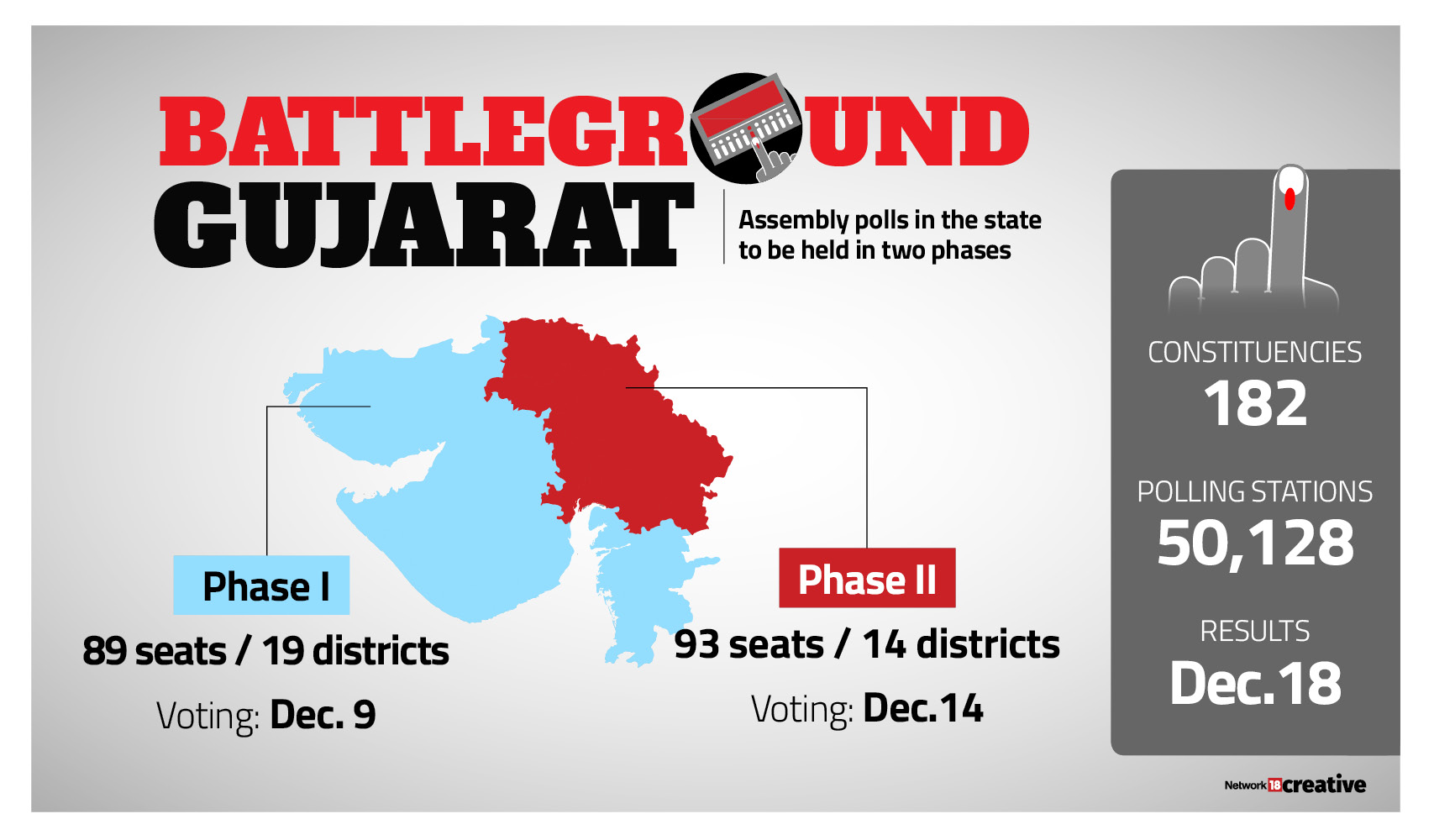 The day is finally here when Gujarat faces the much awaited second phase of polling today. The assembly elections of Gujarat is being regarded as the most important elections after the 2014 Lok Sabha elections. The results of this elections will also decide the fate and the turn the course of events will take in the forthcoming Indian politics.

As per the surveys, it is being speculated that the BJP will continue its reign in Gujarat, maybe with a smaller margin as compared to earlier, but the party will win the polls. While on the other hand, Congress also though unlikely of its record in Gujarat in the past 22 years, is also expecting a win. If the BJP wins, the party will be a step closer to achieving its aim of a Congress mukt Bharat, but if by any chance Congress nails the victory, it will be a major blow to the BJP and mostly it might have a diverse effect on the next Lok Sabha elections due in 2019.

For almost three months in what seemed like a rough battleground for BJP and Congress, both the parties did not leave any chance to attack and counter-attack each other. While Prime Minister Narendra Modi was the star campaigner of the BJP, the newly elected Congress President Rahul Gandhi was the star campaigner for the opposition party. Even if the Congress fails to win the polls, the Gujarat elections will definitely leave the party in better condition and hopes for future.

Congress who was only surviving on the ventilator is regaining some strength back since Rahul Gandhi took up his position a little seriously and personally saw to the campaigning in Gujarat. Nobody denies the fact that Rahul Gandhi has taken the Gujarat election as a challenge and a way to prove his leadership and there is no doubt in that the everyone has witnessed a new avatar of Rahul Gandhi.

The first phase of voting for the Saurashtra and south Gujarat region was completed on 9 Dec, where, of the total 182 seats, 89 went to polls. The voting for the second and the final phase of elections is underway where the remaining, 93 constituencies in the North, West and Central parts of Gujarat are facing the polls. A total of 851 candidates are in the fray for the second phase. Voter turnout for the first phase of the Gujarat elections stood at 66.75 percent. As per the updates, the 39 percent of voter turnout is recorded until 12 pm.

Early in the morning before the voting began, both Prime Minister Narendra Modi and Congress President Rahul Gandhi posted tweets, appealing the Gujaratis to come out and vote in huge number and practice their franchise.

Today is Phase 2 of the Gujarat elections. I request all those voting today to vote in record numbers and enrich this festival of democracy.

Prime Minister Narendra Modi cast his vote at booth number 115 in Ahmedabad’s Sabarmati. After the voting, Modi hit the streets of Ahmedabad, flaunting his inked finger while hanging out of a moving vehicle as a large crowd gathered around him. On this action of the Prime Minister, the Congress made a scathing attack on Modi saying that he is holding a roadshow to showoff his voting. The opposition also accused the PM of violating the model code of conduct by holding such roadshows just after casting his vote.

The Congress also announced to hold a press conference later in the day and criticised the Election Commission for allowing PM Narendra Modi to make a spectacle of his voting. Congress in charge in Gujarat, Ashok Gehlot, also accused Modi of violating the model code of conduct by flaunting through roadshows. He alleged that Election Commission seems to be working under pressure from PM and PMO.

While the Congress spokesperson Randeep Surjewala said that Chief Electoral Officer is acting like a personal secretary to the Prime Minister. He further added that this type of behavior of the Election Commission is a matter of shame for the poll panel.

While during the polling, a fault in the functioning of the EVMs was reported at many booths. Addressing a press Conference, Chief Electoral Officer BB Swain said “a total of 63 complaints of EVM technical glitches have been received so far of which 34 Machines were replaced while other started functioning after technician attended. Swain confirmed that no incidence of violence have been reported anywhere.”

The results for both the phases held in Gujarat along with the results of the Himachal Pradesh Assembly elections will be announced on 18 Dec.