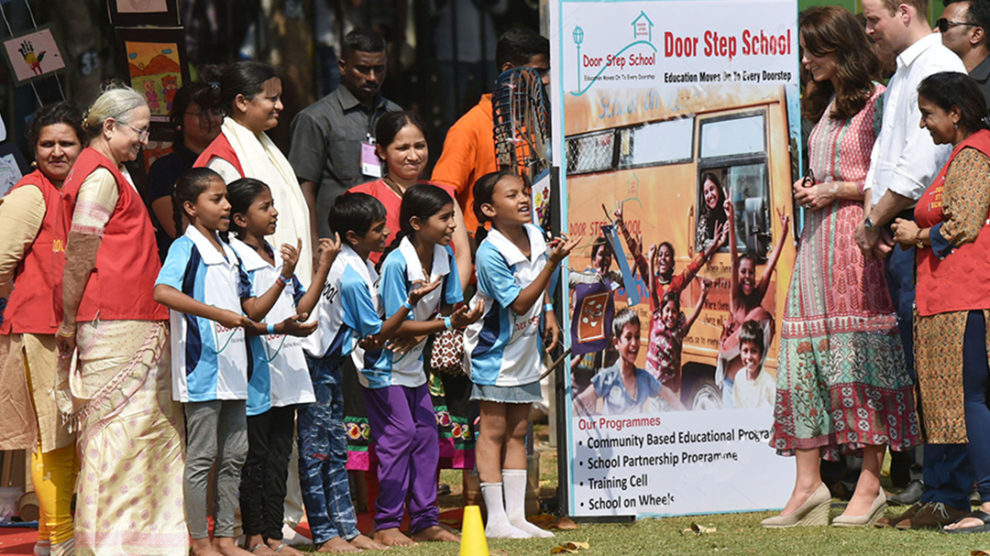 We vouch by every going generation, we live in the present and we live for the future. But do we really know what has been for what makes these children a future asset. We need to sit and think what makes a crop of generation to be well educated and self-sufficient. It is education. Now let’s take a look at some eye openers which will surely make one think deeply and intuitively introspect the Indian education system –

These figures might leave an impression on readers, provoking debates & arguments as to what government and policies are doing in this context. We would want to believe that as good as it looks on paper, it might be in our daily lives as well. But the ground reality functions in a very different way, reaching out to these people in their settlements and to every nook & cranny is not just tedious but also a requirement which is a herculean task.

And we salute such individuals, Bina Lashkari (with Rajani Paranjpe) who have been working towards the cause of education for unprivileged and economically weaker strata , with an approach that has never been seen before in India. These children are first generation learners whose parents have never been to school or have dropped out due to some reasons.

Bina Lashkari is a University of Mumbai graduate and post graduate who happened to be Rajani Paranjpe’s student during her university days. Both had always shown a keen interest and inclination towards education & primary education in particular. In 1988, while working at the Social Service Center at Colaba Municipal School, the idea of the Door Step School was incepted .Though a brainchild of Rajani Paranjpe, this became a reality after Bina Lashkari and few others came on-board.

Paranjpe had been teaching Research Methodology and Indian Social problems ,when it took to her notice that the primary education is the footing for any educational field. It was not only important to enroll students but also to make sure that they retain their schooling through the required period of time. As soon as the work of reach out started, several factors started rolling out which made them realise, many were beyond their influence. Thereby they took upon themselves to launch with a motto as Rajani puts it, “ We go wherever the children are and start the classes right there”.With this in mind they took classes at most unexpected places like pavements, temples, construction areas, railway stations etc.

Their initiative aims at achieving 100 percent literacy which Bina(with Rajani) realizes can be achieved through total school enrolment and quality education for all. Despite several  government policies and initiatives formulated every now & then, it has been a tedious task to reach out to these people. Thus, the Door Step School came into being by literally being at the doorstep of these children. Bina Lashkari (with Rajani) had three prime areas of focus which are non- enrolment, wastage (dropping out of school in early stage) and stagnation(redundancy seen from the expected level of education). That has continued to depreciate the education system (mainly public) for children belonging to unprivileged & economically weaker sections(EWS). With these focus areas, they were looking to address issues such as major proportion of children preferring work (quoted child labour) over the education, need for a flexible program and reducing the cases of dropping out along with inclusion of these children into the mainstream education system.

Lashkari (with Rajani) have been working to bridge this gap in the education system for these children and the government involved. Thus, constantly striving to redefine educational learning and improving school’s pedagogy to make sure it is a better place to be in.

The Door Step School (DSS) came into being in 1988 -89 with its pilot project started in Mumbai. The first project program began with teaching 50 out of school teenagers of the Banjara community at Cuffe Parade in Colaba, then commencing to 4 other communities. Eventually DSS worked to directly intervene and collaborate with Balwadis & Municipal Corporation Schools, to address the issues of wastage and improve upon the quality of education through the School Partnership Programme.

The DSS has a three fold model for its functioning centred on Direct Education, School Intervention and Teachers’ Training. In 1988, further 4 programs were introduced i.e.literacy or non-formal education (NFE) classes, study support classes, pre-primary education and community libraries. By 1993, Door Step School had expanded its base to Pune to target age groups from 3- 18 years old in the footsteps of its predecessor DSS, Mumbai. With a purpose to mirror the activities of improving the educational system, addressing academic needs with suitable strategies and formulating effective reach out plans.

Each program evaluated upon addressing certain academic and educational needs. In pre-primary education two areas were looked into – preparing children & parents for schooling ,by providing timely enrolment and ensuring completion of the documentation process. As many were not equipped with basic requirements such as birth/age certificates. Providing with school transport to ensure no dropouts and stagnation for regular school attendance. Study support classes for additional academic support for attending students to reduce premature dropout rate. NFE classes are designed to reduce illiteracy. And school and community libraries as well as reading classes to ensure better readability to promote academic affinity. This collectively contributes towards maximum academic benefits and preparedness.

DSS runs from 9:30 AM till 5:30 PM with 750+ member strength which caters over 30,000 unprivileged children at construction sites and urban slums in Pune & Mumbai each year.The organization has a dedicated team of 1,000 volunteers and teachers with 50,000 children covered in Pune branch and near about 12,000 children in Mumbai branch.

An extensive planning & care is taken to scout for appropriate locations with sufficient resources,logistic feasibility and to ensure children’s safety to take classes. Bina Lashkari with her organization also works to provide required support and facilitates admissions into Municipal Schools, since DSS at the moment cannot offer full-fledged education.The libraries are equipped with barcoding to allow to keep a track of books exchanged and teachers also work to chaperone children to school from their respective houses.

The Door Step School has other related centres for computer classes, science labs (or Quest) & creches for children from 0 to 3 years of age for imparting digital literacy and life skills training. As seen, most students are now interested in getting educated in English medium to improve upon their English language skills. DSS equally focuses on co-curricular activities and overall development of children by celebrating festivals, sports events, educational field trips & involves parents into the academia to keep them updated about their wards progress. And even provides with academic and other related counselling & guidance.

The formulated programmes and projects such as First-Step Forward programme, academic journal called Hamara Akhbar, Project Foundation( under Direct Education), Project Grow with Books (under School Intervention Programme),Every Child Counts, Parivartan Training Centre and Project Teach Them Young, today accounts for more than 100 centres in Pune & Mumbai. And over 40 graded learning books have been authored/ co-authored by Rajani Prajanpe and some by Bina Lashkari in English & Marathi.

Amongst social initiatives several such are- WASH program to impart sanitation and cleanliness education to children, reading rooms and community learning centres are successfully implemented. The only persistent challenge faced is tracking children of construction workers who are constantly migrating, to encourage them to continue with their studies This is where the Door Step School is yet to find an effective solution.

The School on Wheels

The most popular programme launched by the Door Step School which holds a signatory importance to the organization. The School on Wheels was launched with a sole purpose to provide classes where none were possible.These mobile schools or Phirti Shalas are buses equipped with all classroom supplies such as TV, Computer, DVD Player and audio visual learning materials.The classes are conducted in 2.5 hours session for each location, to teach subjects like Maths, Marathi, Hindi,English, Science and Computers for 2-3 locations in a day. During evenings, the School on Wheels also works to provide as reading rooms in areas with certain communities that enables children to access books for reading.

When Bina Lashkari started with this iconic program many thought that the concept was unmanageable and unrealistic.But over the time what started with one bus, has grown into 10 buses employed for this format of school programme.The School on Wheels serves to 20-25 students aged 8-14 years at a time, to impart basic literacy classes along with educational sessions on social skills.In Mumbai’s Borivali region, School on Wheels has a special program to cater to tribal children living in the hamlets of the Sanjay Gandhi National Park. This is an initiative to bring education to deprived and secluded corners separated from the city’s settlement.

Today, the Door Step School has completed over 31 years of its existence with funding from and associations with some prestigious organizations of various sectors viz. NGOs, Corporates and Government organizations. Vibha, Asmae,Concern India Foundation, Educate the child, Asha Silicon Valley, Forbes Marshall, Ernst & Young, ARAI, various builders associations, HN1 donors are few to name from the list. DSS has taken several good & encouraging steps such as introducing scholarships (Nanhi Kali) to girls who have performed exceedingly well in academics and naming the bylanes of slums to honour children.

For Bina and the Door Step School their duties are beyond academic walls as they follow-up with the ex-students, till the later stages into livelihoods.For the vigour and determination exhibited in her efforts, she was awarded with the civil honour – the Nari Shakti Puruskar (Mata Jijabai Award) in 2013 by of-then the President of India, Shri

Pranab Mukherjee. Owing to its widely appreciated programmes and initiatives, in 2016, DSS was visited by Duke & Duchess of Cambridge during their 7 day visit to India and Bhutan.

As Rajani shared with the Better India in an interview, “The impact made might be not perceptible or measurable on an immediate basis but it will surely sow the desire for education which will spread and hopefully makes education a priority amongst the unprivileged”.With India capping 129th position amongst 189 countries in Human Development Index for 2019 and urban literacy rate currently measures 79.5% due to a marginal growth.The goal to achieve UN’s Sustainable Development Goal(s) (SDGs) number 4 that emphasizes on ensuring equitable and inclusive education along with lifelong learning for all; India needs people like Bina Lashkari who believes in attaining happiness from giving and feels if any ordinary woman like her could do it so can anybody, as told in an India Express interview.

Thus, taking into consideration the National Education Policy Draft of 2019 which proposes to universalize pre-primary education and provide foundational literacy/ numeracy for all by 2025. The programmes and initiatives of such types are bountiful additions to the Indian education system.