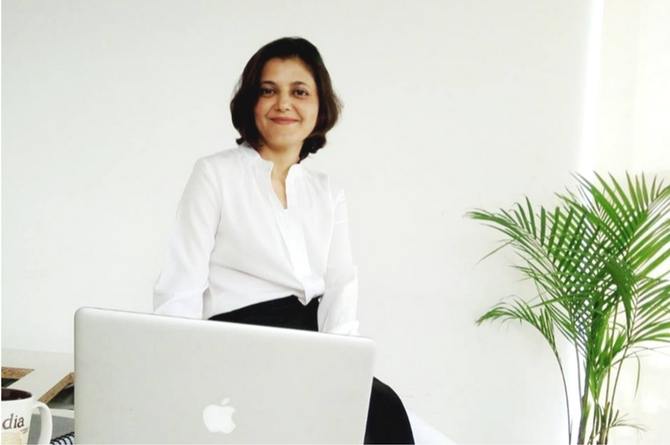 When one looks at these facts and findings, it alarms as well as perturbs an individual especially the female population of our nation. This makes us think as to what could be done to bring that one little change.

Meet Sairee Chahal, her life is no less than a synopsis of an incredible journey – coming from a small town of Muzaffarpur in Uttar Pradesh, growing up in an era when villages were deprived of interesting and enriching content- where television had redundant content and there was no basic access to internet. One cannot help, but wonder at her sheer determination to allow herself to develop into an insightful person. And to able to have clarity in her goals right from her formative years.

Perhaps, it was her inner drive and an ability to stay off put to wade through the social limitations and abjections that threatened to limit her access to books, which she says played a major role in shaping her into a woman, as we know of her today.

Sairee started her early stint with work was as a freelancer while pursuing her Russian language studies from Jawahar Lal Nehru University, Delhi. There she did a couple of freelancing projects with the foreign embassies. And went on to complete her further studies from IMT, Ghaziabad. In an academic time-span of five years, she had already gained four years of work experience before starting with her first entrepreneurial journey.

The year 1999 witnessed her first brush-up with a startup. The Newslink Services was co-founded by Sairee with Deepak Kamran, a mariner. The end- product enterprise was made to cater and help mariners feel connected and informed about the outside world. Later, she went on to work with the top corporate and federations like Heidrick and Struggles, CII.

But it was only in 2006, after coming back to India, when she entered full-fledgling into the startup universe, which was gaining momentum around that time. The same year, she founded SAITA Consulting. During this period, she met with female applicants of high calibre, which eventually made her realize and gave her an idea. And five years later, she went on to co-found Fleximoms.

Sairee started her next entrepreneurial venture, Fleximoms with an aim to provide 80 percent flexibility to stay-at-home mothers and women returning to work after a long sabbatical, in SMEs and Corporates. The organization’s business model was based to provide with a basic salary and decent working hours. Fleximoms created a community designed to become a diverse solution provider, that has solutions ranging from opportunities, grooming, mentoring and information. The organization took special care to ensure that the listed jobs were not reversely flexible and working as a conduit to provide with feasible work conditions for women.

As she explains, Chahal draws her motivation from her own personal experience -” In a class reunion, it was not surprising and nobody found it odd, to find only five women working with a female strength of 35 in a class of 60 students”. Further she adds,” I am the first working woman of my family”!

Fleximoms launched its first programme, Second Chance Back to Work that provided current work trends and drawing a personal road map for the next steps to be taken.

Today, the organization has twelve employees – seven on full time and rest five are on flexible basis with more than 250 companies using their job board having 2,000+ job connections since its conception.

In 2014, after Fleximoms, she realized there was more that could be done for women to promote an overall growth and well-being of women. That was when SHEROES came into being, touted as the next Facebook for women minus the hazards. But Sairee begs to differ, as quoted in her BloombergTV India interview explaining, “This is a digital community platform built to provide support, guidance and confidant in various aspects of life – finance, family, love, entrepreneurship, health etc.” This community which has been built by women, for women along with a few good men, she puts.

SHEROES has attracted users from the different walks of life – Corporate, women in tier-2 cities, women in tier-3 cities, mothers etc. The diversity of users is mainly seen due to multiple acquisitions made by the company- Babygogo, Gharkamai, Maya and LoveDoctor which has worked to become a hub of totality, with a 24-hour helpline and communities to help resolve issues.

Since its launch SHEROES has come up with SHEROES campus programme, SHEROES Summit and SHEROES Community. In the two years since its start, SHEROES now has 1 Mn user base of women and 20K companies have signed up with 100K job listings posted, as told by Sairee to Inc42.

Over the years, the SHEROES Reports have provided some great insights which has played a pivotal role in formulating companies’ business plans and the organizations such as ClearTax, Principal Advisors and Honeywell has been utilizing the connectivity which allows them to touch-base with women from a variety of workforces, told to YourStory in an interview with Chahal.

This year, the organization had raised 2.6 Mn USD in three rounds, from various organizations such as Lumis Partners, HR Funds, Leo Capita, Vijay Shekar Sharma and others as reported by Inc42.

Building identity for women and her plans ahead

In 2016, Chahal was awarded the prestigious Aspen Leadership Fellowship by the American Aspen Institute which recognizes 24 leaders across the world every year. She also has been awarded with The Cartier Women’s Initiative Award amongst the others. In 2018, she ranked 53 in Onalytica’s “Future of Work top 100 Influencers List”.

She deeply believes in the work-life balance and staunchly holds a core belief to create a value and an intangible meaningful product rather than looking to sell something to women, as cited numerously in various interviews.

Earlier this year, Chahal was appointed as a Board of Director for PayTM, a digital payment and finance technology company. As rightly quoted on the Entrepreneurship Day, “An access to capital and the availability of adequate infrastructure are two driving things required to boost the numbers”, as told to BusinessLine.

She has always been positive and strongly credit it as a driving force, thereby expressing a deep gratitude towards her family and her team who has always got her back. There is an ambitious plan of scaling SHEROES users to 500 Mn in next 5- 6 years,  as Sairee shared with Entrackr.

In the next few years to come, Sairee Chahal hopes to see her work for women empowerment and to ensure gender parity would create a future, where these issues are seen like any other worldly issues.