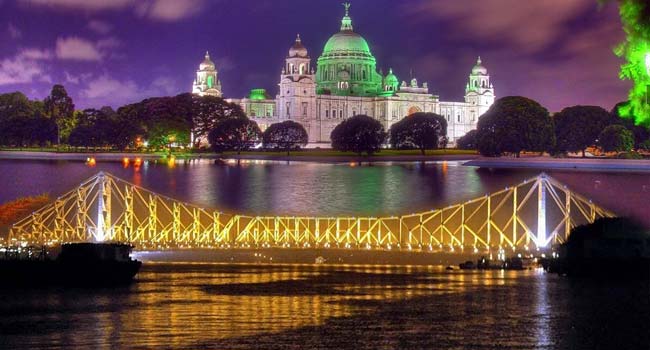 Known as the art and cultural capital, Kolkata is a religiously and ethnically diverse center of culture in Bengal and India. It is also an amazing center for commerce and learning. Here are 10 places to visit in Kolkata that are a feast to the eye.
1.Victoria Memorial

Also known as the finest and most prominent building and art museum of Calcutta(now Kolkata,)is a memorial of Queen Victoria of the United Kingdom. The Memorial, an imposing white building that was completed in 1921, currently serves as a museum. It houses a collection from the British Colonial period, including a number of impressive paintings, sculptures, and books.

Howrah Bridge (also called Rabindra Setu) is a cantilever bridge that spans over the Hoogly River in West Bengal. Being one of the most celebrated landmarks of Kolkata, it is the sixth longest bridge of its type in the world. It connects the city to the Howrah Station, the most important railway station of Kolkata.

Situated on the western bank of Hoogly, Belur Math is a place of pilgrimage for people from all over the world professing different religious faiths. It was at Belur Math that Swami Vivekananda, the foremost disciple of Sri Ramakrishna lived the last years of his life. On the eastern bank of river Hoogly resides Dakshineshwar Kali Temple, another celebrated landmark near Kolkata.

The park sprawls over 480 acres and is surrounded by a 104 acres water body with an island in the middle. It is situated in Rajarhat, Kolkata. Inside the park you can find ecological zones like wetlands, grasslands, urban forest, theme gardens and urban recreational spaces. The main areas of interest are: Urban museum, Bonsai garden, Butterfly garden, Musical fountain and Eco Island.

The house was built in 1835 by Raja Rajendra Mullick, a wealthy Bengali merchant. It is one of the most elegant houses of nineteenth-century Calcutta. This splendid mansion is famous for its marble walls and floors, Western sculpture, Victorian furniture and paintings from around the globe. Located next to the palace is the Marble Palace Zoo, which houses peacocks, horn-bills, pelicans, storks, cranes, monkeys and several species of deer.

Located in central Kolkata, Burrabazar (also spelt Bara Bazaar) happens to be the commercial hub of the city and one of the largest wholesale markets in the country. For Diwali, it is transformed into a huge market for festive and religious ingredients. The series of shops opposite the Jain temple, flaunts ornately decked-up idols of Hindu gods. The Bazaar is also popular for its yarn and textile business, electronic goods and artificial ornaments.

The Alipore Zoo is one of the most popular winter tourist attractions in Kolkata.
The zoo has been often compared with the Jardin de Plantes, France and the Zoological Society, London. Laid out on 45 acres of land, the zoo has around 1,266 individuals and about 108 species. Till 2006 Aldabra Tortoise named Adwaita, who was 250 years was the famous attraction.

Benoy-Badal-Dinesh Bagh (B.B.D Bagh) formerly called Dalhousie Square is an old fort built by the British which is now the administrative power house of Kolkata. Situated at the heart of the city the square is famous for the cheap food vendors that sell throughout the day. Declared a World Heritage Site, Dalhousie is a massive blend of colonial architecture and British colonial heritage.

Sunderbans National Park is a delta where you can find dense mangrove forests that form part of the subcontinent’s largest mangrove system with a tiger population in a distinct ecological setting. Sundarban National Park is located 140 km far from Kolkata Airport and is connected with Kolkata – Basanti High way as well. The only means of traveling the park is to by boat, down the various lanes formed by the many flowing rivers.

Popular by the name Acharya Jagadish Chandra Bose Indian Botanic Garden, this exquisite landscape is located in Shibpur, Howrah near Kolkata. Trees of the rarest kinds, from Nepal, Brazil, Penang, Java and Sumatra can be found here. One major attraction of the garden is The Great Banyan, the largest tree in the world (330 meters in circumference).

I hope you enjoyed this virtual tour around Kolkata-the city of joy! Drop in your comments and suggestions below.