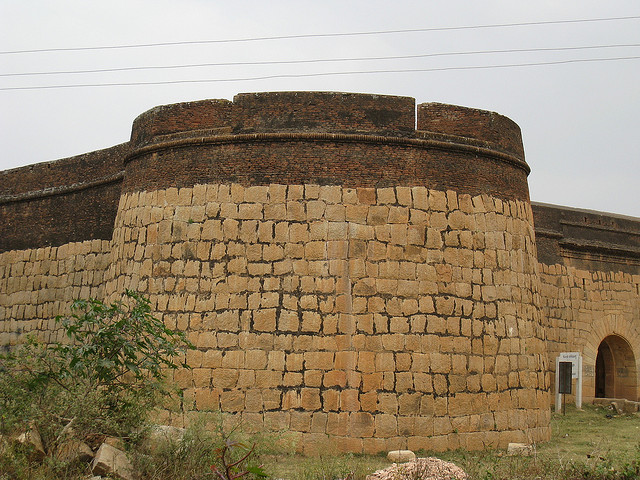 Devanahalli Fort is located in North Bangalore, 35 kilometers from the main city. It is situated on the side of National Highway, near Bangalore International Airport. It was built by Mallabairegowda in the year 1501. It was attacked in 1749 by Nanjarajaiah, the then Dalwai of Mysore, hence was occupied by him. Later on, the fort was passed on to Hyder Ali, which was then handed over to Tipu Sultan. In 1791, Lord Cornwallis seized the fort and took the possession during Anglo-Mysore War.

The birth place of Tipu Sultan is also near the Fort. The Devanahalli Fort is spread over an area of 20 acres and was built by Hyder Ali and Tipu Sultan. There are 12 semi-circular bastions at regular intervals. The bastions are provided with gun points built with lime and brick. The inner fortification has a spacious battlement. The fort has entrances decorated with cut plasterwork at the east and the west.

There are numerous temples with impeccable architecture and religious iconography that one must witness.  Amidst all the temples, Venugopalaswamy temple is the oldest one. The wall of the temple depicts scenes from Ramayana and feats of Lord Krishna as a child. The pillars have beautiful statues carved on them.  A spectacular Garuda Stambha is placed at the entrance. The sculptures inside the Venugopalaswamy temple is compared to those found in Belur and Haleibedu. The entrance houses a Sikhara in the Dravidian style.

Siddalingeshwara temple is just a few yards away from Venugopalaswamy temple. Raghavendraswamy Math is situated next to the temple. Chandramouleshwara Temple is another age old temple situated in the fort. It is built in Vijayanagar style and has spacious inner prakara. Sarovaranjaneya temple is another temple on the main roads which is dedicated to Anjayena. The Nanjundeshwara temple was called as Kashi Vishveshwara and is regarded as the oldest temple in the town.

The Devanahalli Fort is a must visit place to witness the spectacular sculptures and the magnificent temples.