The Indian Wire » Politics » Setback to Congress in Telangana; 12 out of 18 MLAs shift to TRS; Speaker approves merger 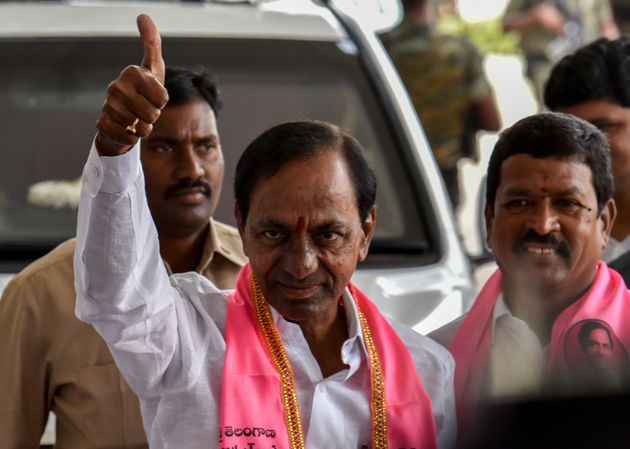 In a big setback for Congress, its 12 out of 18 MLAs in Telangana Assembly breakaway with the party with Assembly Speaker Pocharam Srinivas Reddy recognized them all as TRS members.

With the development, TRS tally in the assembly is now 103 MLAs in the 119-member Assembly. Congress is now left with 6 MLAs and is now no more a second largest party as Asaduddin Owaisi‘s AIMIM have 7 Legislators in the Telangana Assembly.

Before this development, a total of 11 MLAs had shifted to TRS in the state. However, Tandur legislator P Rohit Reddy on Thursday also come in-board. It came hours after TPCC Chief Uttam Kumar Reddy resigned from Assembly after elected to 17th Lok Sabha. With Reddy’s resignation, Congress tally in the state fell to 18 followings which 12 merge with TRS.

As per rule, To avoid defections, 2/3rd MLAs of any political party is required to join the party in the assembly without facing anti-defection laws. 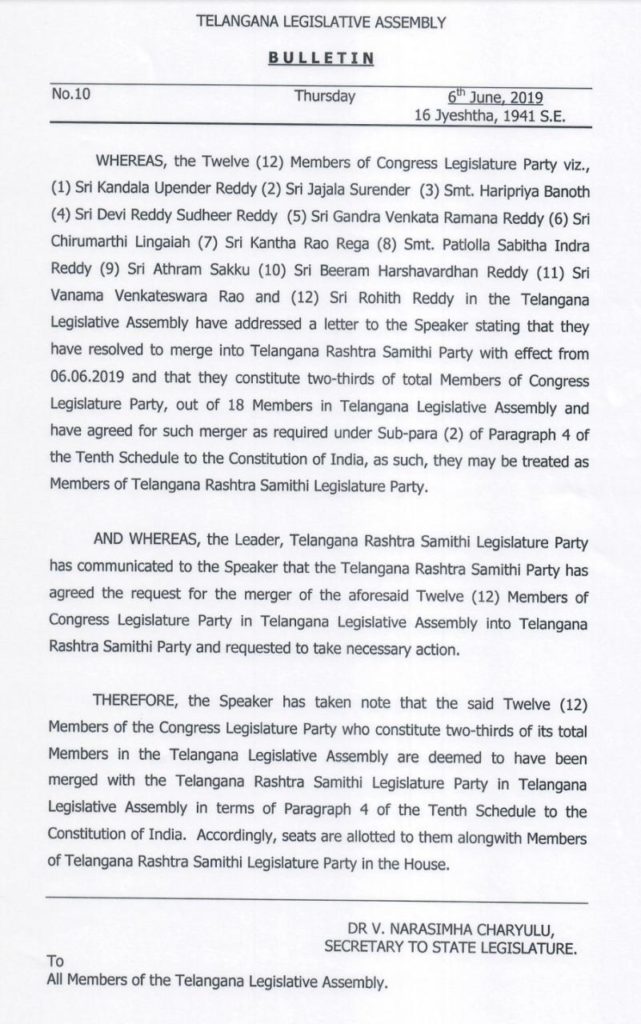 If Sources to be believed another Congress Lawmaker, T Jayaprakash Reddy is also expected to join TRS in coming days.

The development is seen as a big embarrassment for the party which had in national polls faced a humiliating defeat. Congress in Telangana bagged 3 Lok Sabha Seats out of 17.

Currently, TRS is heading a government with 103 MLAs, AIMIM has 7, while Congress is now left with 6, TDP and BJP has one each MLA.

While TPCC Chief Uttam Kumar Reddy expressed displeasure and said to approach court over the issue. Talking to ANI, Reddy said, ‘The Speaker hasn’t withheld the dignity of his office. We tried to contact him by every means but he wasn’t available for us’.

Uttam Kumar Reddy: But in some secret place the speaker took some representation from defected Congress MLAs against whom disqualification notices under anti-defection law are pending with him, and announces merger of Congress Legislature Party. Can anything be more disgraceful? https://t.co/UUhqZyf6fD

Congress also protested outside Assembly over the unavailability of the Speaker. They alleged that in some secret place the speaker took some representation from defected Congress MLAs against whom disqualification notices under anti-defection law are pending with him, and announces a merger of Congress Legislature Party.