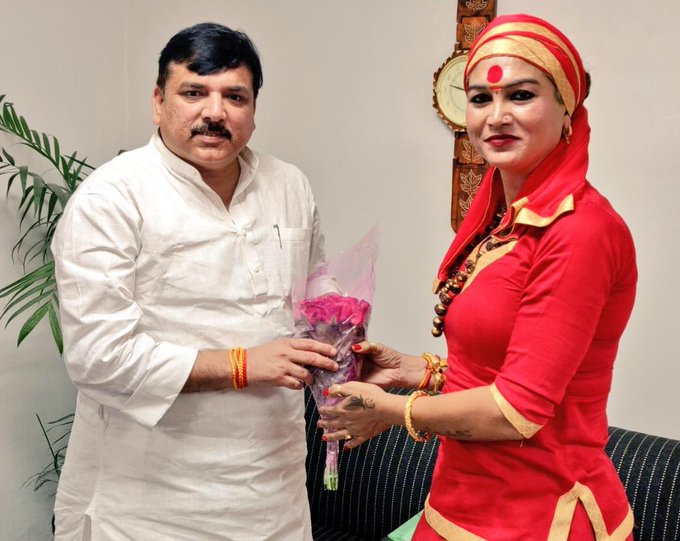 The Delhi ruling Aam Aadmi Party who has decided to contest some seats of Uttar Pradesh in the mega battle of ballots has announced to field its first transgender candidate from Uttar Pradesh’s Allahabad now known as ‘Prayagraj’.

The party has named Mahamandaleshwar Bhawani Nath Valmiki, a member of the ‘Kinnar Akhada’, to contest from Allahabad on AAP’s ticket.

Being transgender we suffered a lot. BJP has treated us like beggars. But it was @ArvindKejriwal and his party who fought for our rights.

AAP stood with us when no one else did. AAP is a progressive party in true sense : Chirpi Bhawani pic.twitter.com/jEqLYg4UI4

Senior party leader and Rajya Sabha MP Sanjay Singh made the announcement of Bhawani’s candidature on Friday. Talking to the press, Sanjay Singh said he wishes Bhawani a very best for the mega battle of ballots. Further commenting, Sanjay Singh said, his party (AAP) has the utmost respect for the community.

Bhawani is a social activist in Uttar Pradesh. She has joined Akhil Bharatiya Hindu Mahasabha’s Kinnar Akhada in 2016.

Bhawani talking to media thanked Arvind Kejriwal and AAP. Valmiki said ‘Being transgender we suffered a lot. BJP has treated us like beggars. But it was Arvind Kejriwal and his party who fought for our rights. AAP stood with us when no one else did. AAP is a progressive party in true sense’

Aam Aadmi Party with this has now announced 7 candidates in Uttar Pradesh. Earlier, the party had on March 24  fielded Yogesh Dahiya from Saharanpur. Dahiya will take on Congress‘ Nominee, and a political Heavyweight Imran Masood and BJP‘s Raghav Lakhanpal. While the AAP named Satish Chandra Sharma from Aligarh and Shweta Sharma from Gautam Budh Nagar Parliamentary seats for the Lok Sabha polls 2019.

However, in an embarrassment to the party, the nomination of its Gautam Budh Nagar Candidate Shweta Sharma got rejected after he failed to get 10 propers.

Apart from this, AAP has already declared Candidates on all 7 seats of the national Capital after alliance talks with Rahul Gandhi led Congress remains inconclusive.