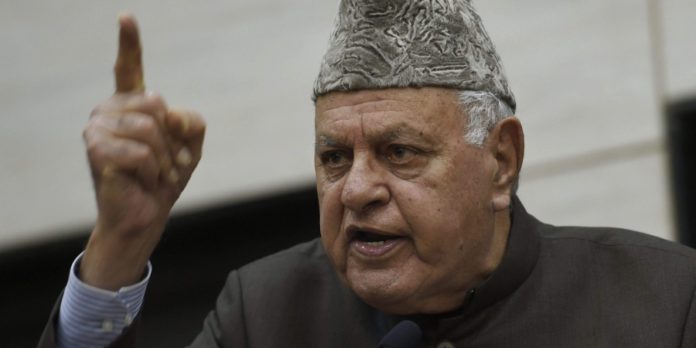 Amid the noisy session of Lok Sabha, Many parliamentarians questioned the absence of National Conference leader Farooq Abdullah and his son Omar Abdullah. The eyes of speculation have cornered the government since “Abdullah clan” is one of the important stakeholders in Kashmir representing the voice of erstwhile state’s population.

It was said that the three prominent leaders were put under house arrest in their houses before the Centre announced its decision to reorganize Jammu and Kashmir.

Today, when the Bill to revoke Article 370 and reorganize the state into 2 Union territories was introduced in Lok Sabha by Amit Shah, many Member of Parliament demanded an answer for the absence of Abdullah family. Shashi Tharoor, Congress MP also demanded the government’s reply on the matter.

Shashi Tharoor, Congress: Why we think it is indeed a black day? Because two former J&K CMs Omar Abdullah&Mehbooba Mufti are under arrest & the whereabouts of our own colleague Farooq Abdullah are still unclear. We still want to know where he is? pic.twitter.com/Wdouz2LKDP

Home Minister Amit Shah in Lok Sabha: I have made it clear thrice, Farooq Abdullah ji is at his home, he is not under house arrest, he is not under detention. He is in good health, mauj-masti mein hain, unko nahi ana hai toh gun kanpatti par rakh kar bahar nahi la sakte hum. pic.twitter.com/m9j8cAufSz

Supriya Sule, Nationalist Congress Party Member, further expressed her concerns regarding the same. She said that the discussion will be incomplete without involving the major stakeholders like Farooq and Omar Abdullah.

Supriya Sule, NCP MP says "I sit on seat 462, Farooq Abdullah sits on seat 461. He's elected from J&K, we can't hear him today.This debate will be incomplete if you ask me. HM says,"Farooq Abdullah has neither been detained nor arrested. He's at his home,out of his own free will" pic.twitter.com/Wf5RI1vzVR

In the meantime, Farooq Abdullah spoke to the media expressing himself. He alleged that the Home Minister is lying to the nation.

Farooq Abdullah: As soon as the gate will open & our people will be out, we will fight, we'll go to the court. We're not gun-runners, grenade-throwers, stone-throwers, we believe in peaceful resolutions. They want to murder us. My son (Omar Abdullah) is in jail https://t.co/Dxz4MGGOiX

The Jammu and Kashmir reorganization Bill, 2019 has divided the state into 2 Union territories, one being Jammu & Kashmir with the legislature and the other being Ladakh without legislature. The scrapping of Article 370 bill has also been moved by Amit Shah in the house. The Home Minister claimed that Article 370 was the biggest hindrance to the development of Jammu and Kashmir.

Various opposition parties have demonstrated their discontent through different methods. While CPI-M called for an all-India protest on 6 August, JD (U) staged a walkout from the parliament.