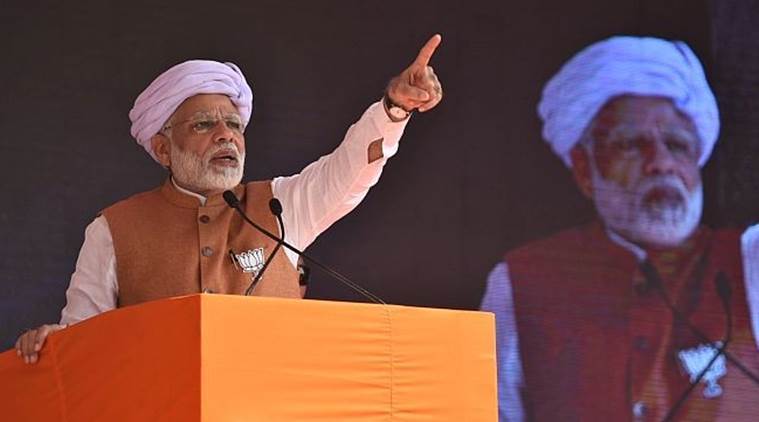 In a last-minute scramble for Patel votes, BJP is going all out to prevent the erosion of the community’s support after Hardik's announcement.

The Patidars in Gujarat are being regarded as the game changers, at least for now, in the poll-bound state. The community holds around 15% of the total population and is believed to be one of the oldest vote banks of the BJP.

But in past two years with the protests headed by Patidar agitation leader Hardik Patel gaining pace, demanding reservation for the Patidars, the community seemed to have entered into a quarrel with the ruling BJP. The government turning a blind eye to the demands of the Patidars has cost the BJP dearly.

Patidar spearhead, Hardik Patel had openly announced that the community will support the party, who fulfills the demands of the Patidars. Also showing his anger towards the ruling government he said that which party he will support is a secondary question, but he would definitely work towards defeating BJP.

Meanwhile, Congress desperately fighting for its survival in the political equations in Gujarat and for that matter even in India, did not want to miss this opportunity. The Patidars were traditionally the vote bank of BJP and if this community moved in the courts of Congress, it would definitely be a boon for the party.

Keeping this in mind, the Congress worked frantically to reach to a formula that would grant the reservation to the Patidars and also not disturb the 50% reservation cap set up the Constitution of India. A few days back, Congress gave a formula to the Patidars which would give them reservation but not under the OBC category but the party if voted to power will introduce a new law that fulfills the demands of the Patidars,

After much research and discussions over the feasibility of the formula, Hardik Patel announced that the Patidars are satisfied with the suggestion of the Congress and will back the party in the assembly elections.

Soon after Hardik announced his support to the Congress, the restlessness of the BJP could be seen. Since the Dalits and the OBC’s who were more or less traditionally more inclined towards the Congress and now the Patidars also joining them, had become a matter of concern for the bJP.

Nevertheless, even after BJP’s vote bank eroding the surveys are suggesting the there is no doubt that BJP will continue its reign in Gujarat and the Patidars support to Congress will not affect much as, if the Patels went to Congress side, BJP has been working to lure the Adivasis, who are the vote banks of the opposition party.

In an attempt to get the Adivasis to their side, Rashtriya Swayamsevak Sangh, the parent party of the BJP has been quietly working for quite some time now. So if the BJP lost the votes of the Patidars, it is claiming that it has been successful in gaining the support of the Adivasis. However, up to what extent this is true, will be revealed only after the elections.

As the political experts and analysts are of the opinion that Adivasis who have stood with the Congress in its bad times, then why will it leave the party to support BJP when the Congress is finally regaining its composure in Gujarat. Congress President Sonia Gandhi, who has lately curt herself off from any campaigning and meetings, due to her health problems is also likely to visit the Adivasi areas in Gujarat, next week to hold a couple of rallies ahead of the first phase of the polls. A two-day programme is being worked out, wherein the Congress high command will be holding four rallies, two each on each day in tribal-dominated seats.

While on the other hand, the anxious BJP who is facing a tough fight from the Congress after a long time is busy grappling to keep its Patel votes intact. In order to get back the Patels, Prime Minister Narendra Modi, while addressing the gathering a few days back, made a few absurd charges on the Congress, in Saurashtra, which is the Patel heartland of Gujarat.

Playing tactful political moves, Modi very cautiously played the cards against Congress, calling the opposition party as anti-Gujarati. He also alleged that the Congress had ‘conspired’ to get rid of four Patel chief ministers in the past, including Keshubhai Patel. During his speech, Modi giving details of the conspiracy said that the Congress had said that Keshubhai Patel was not able to handle the post-quake rehabilitation, back in 2001.

However, if the reality check is done, Narendra Modi, who was posted in BJP headquarters in Delhi at the time – had worked for the replacement of Keshubhai on these very charges, and he had himself become the chief minister of Gujarat after Keshubhai left office. The former Chief Minister Keshubhai Patel himself also believed that Modi played a vital role to remove him from the post and take over the throne. Following the incident, Keshubhai had also formed the Gujarat Parivartan Party to fight the BJP in 2012.

The second and rather a strange allegation of Modi on Congress was that the party removed Chimanbhai Patel because he was proving to be his own man as chief minister. However, it is well known to everyone that Chimanbhai had to step down from the post after the massive student-led Navnirman movement in 1974. Another major fact that not sure about Congress, but surely points out that Modi was involved in this also is that as a young activist of the Akhil Bharatiya Vidyarthi Parishad, Modi himself joined the Navnirman Andolan and that this movement led to the massive movement that engulfed the entire Gujarat.

The third Patel Chief Minister that was forced to step down because of the Congress, according to Narendra Modi was Anandiben Patel. He asserted that “Congress brought in money and men and fanned Patel quota violence. In fact, the Congress never allowed the Patel chief ministers to be in peace.”

All these allegations made by Modi are in an attempt to woo back the Patidars to support the BJP. Though some of the political analysts are of different opinions. According to one of them: “Modi has the gift of the gab and is a powerful speaker but I don’t think whether these charges will convince those Patels who have decided to desert the BJP. But can’t say anything about fence sitters.”

Another analyst said that “In this election, the Patel votes might be the decider. Thus there is a mad scramble for their votes. This is the reason why Narendra Modi, Rahul Gandhi, and Hardik Patel are campaigning in Saurashtra at the same time.” He further added that The older settled middle and upper-class Patel in cities are still for the BJP but the younger Patel are restive. I think that those below 35 might not vote for the BJP.”

Who the Patidars will support or which community will support which party are the types of questions that have occupied the minds of many these days. Gujarat assembly elections are being regarded as the most important polls after the 2014 Lok Sabha elections. This election has also become a prestige for both the BJP and Congress. While Congress is striving hard to end its political exile of 22 years in Gujarat and make a thrashing come back through the win in these polls, BJP is fighting hard to keep the rule to itself and continue reigning.

However, nothing can be said with clear certainty as to who will win the Gujarat assembly elections or for that matter what are the possibilities for either of the parties.