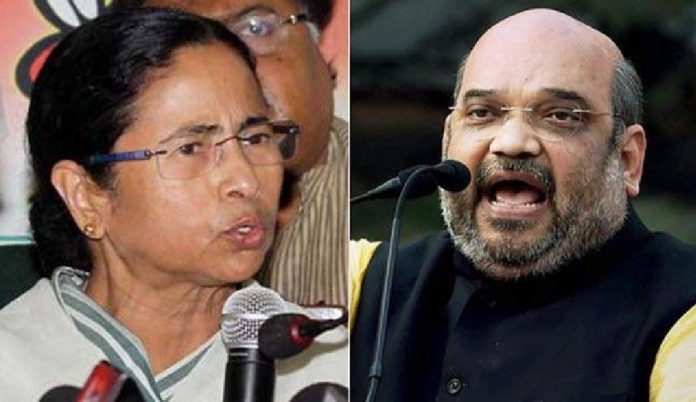 The Trinamool Congress called for protests against the NRC in Assam. The protests are to take place across West Bengal but not in Kolkata. The BJP claims that the protests are an attempt to sabotage Shah’s rally.

The BJP was greeted with black flag protests by Youth Congress workers, on reaching the venue. Slogans were raised against the BJP president and Prime Minister Narendra Modi, asking the BJP to quit West Bengal. Shah’s envoy was also blocked by the youth Congress as they parked their bikes in the way. The Kolkata Police cleared the way for the envoy, and Amit Shah was welcomed by the BJP state-in-charge Kailash Vijaywargiya and Dilip Ghosh.

State BJP Chief Dilip Ghosh warned that clashes would ensue if the TMC tried to stop BJP rally-ists from reaching the venue where Amit Shah was, and that TMC would be to blame for it.

The BJP rally is an effort to expand the party’s base in West Bengal where, in the General Elections of 2014, it got only 2 seats.

The main point of contention between Mamata Bannerjee and Amit Shah was that of the NRC issue in Assam.

“All Mamata ji has done is to object against NRC. But NRC is the process to throw illegal immigrants out. Shouldn’t Bangladeshi immigrants be thrown out?”, Shah said. He added, “We want to ask Mamata Banerjee why she is protecting Bangladeshi infiltrators. Rahul Gandhi is also not clarifying his stand on the issue. This is because of Congress‘s vote-bank politics.”

He further said that while the Chief Minister may have shut TV channels or stopped them from broadcasting his speech, he has full confidence in his party workers.

“Our army of party workers will go from house to house, lane to lane, village to village, district to district, town to town, and city to city… and there is nothing Mamata Banerjee can do to stop us. We are not afraid of hard work.”, he said.