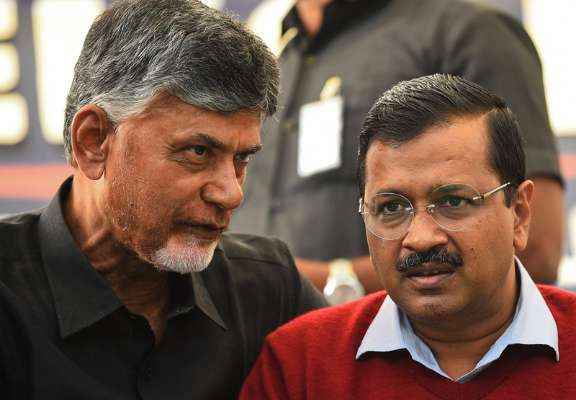 Aam Aadmi Party Chief Arvind Kejriwal had on Thursday visited Andhra Pradesh to galvanize support for Telugu Desam Party and Chief Minister Chandrababu Naidu who is seeking another term in the office. State Polls of Andhra Pradesh and General Elections are slated to be clubbed.

Telugu Desam Party, the incumbent party of the state in a run-up to the polls has announced the names of TMC Chief Mamata Banerjee, NC’s Farooq Abdullah, Arvind Kejriwal, Tejashwi Yadav and bunch of top Leaders as its star campaigners for the mega battle of ballots.

Delhi CM Arvind Kejriwal in Vijayawada: I have come here to make an appeal to the people of Andhra Pradesh that they should vote for Chandrababu Naidu ji. pic.twitter.com/iih5rqqMdW

Delhi Chief Minister Arvind Kejriwal who reached Vijayawada on Thursday said he is here (Vijayawada) to seek support for his Andhra Pradesh Counterpart Naidu. ‘I have come here to make an appeal to the people of Andhra Pradesh that they should vote for Chandrababu Naidu ji’ said AAP National Chief Arvind Kejriwal.

Kejriwal talking to the press in Andhra Pradesh hailed Naidu for the development in the state. He (Naidu) in the past 5 years has built a vibrant and developed Andhra Pradesh, his work should be taken forward.

Apart from AAP Chief, TMC Supremo Mamata Banerjee is expected to reach the Deccan State on March 31 and will seek votes for Naidu in Vizag. While National Conference Chief Farooq Abdullah has been asked to galvanize support from Muslim dominated constituencies of Kadapa and Allagadda. Abdullah is expected to visit the state in the first week of March.

While RJD’s and Bihar Leader of Opposition Tejahswi Yadav will participate in a public rally in Nellore on April 2. Former Prime Minister and JD(S) Chief HD Deve Gowda and NCP‘s Sharad Pawar will campaign in Anantapur and Kurnool districts (bordering districts of Karnataka and Maharashtra).

However, it is noteworthy that Naidu who has held rounds of discussions with Congress President for cementing a pan India front against BJP, choose not to include Rahul Gandhi in his star campaigners list.

State Polls of the State is slated to be clubbed with General Elections 2019. Andhra Pradesh will vote in a single phase on all 25 Lok Sabha Seats and 175 State Assembly seats on April 11.