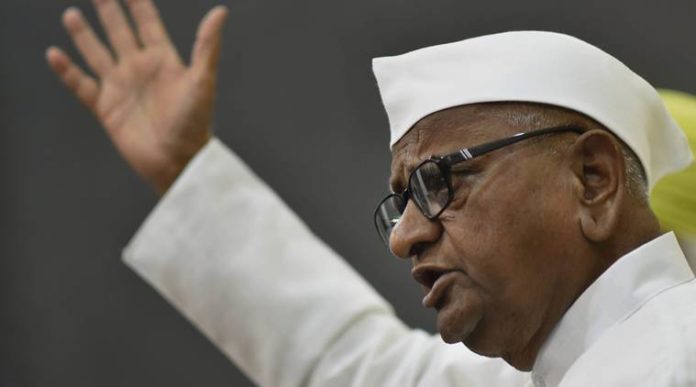 Anti-Corruption Crusader Anna Hazare who is on Indefinite Hunger strike demanding Lokpal and Lokayukta in states on Sunday threatened Narendra Modi led Centre Government that if the government would not fulfil the promises he will return the Padma Bhushan.

“If this government does not fulfil its promises made to the country in the next few days, I will return my Padma Bhushan,” he told Sunday evening. “(The) Modi government has breached the faith of people.  Hazare said, ‘I will be returning my Padma Bhushan award to the President. I did not work for that award, you only gave me that while I was working for social cause & the country. If the country or society is in this condition, then why should I keep that?

Anna Hazare: I will be returning my Padma Bhushan award to the President. I did not work for that award, you only gave me that while I was working for social cause & the country. If the country or society is in this condition, then why should I keep that? (03.02.19) pic.twitter.com/bch2mmw08o

Hazare was awarded with the third-higher civilian honour of the country in 1992.

Earlier in the day, BJP’s Maharashtra ally Shiv Sena came in support of Social Activist. Sena argued to emulate Social Leader Jayprakash Narayan and lead an agitation against corruption. Shiv Sena Chief Uddhav Thackeray appealed to the BJP-led state government — of which his a part- to intervene and not to ‘play’ Hazare’s life.

Around 5,000 farmers from the district are likely to stage a protect outside the Ahmednagar collector’s office on Monday to support Hazare’s agitation, his associates said.

The decision to hold the protest was taken at a gram sabha (village meeting) at Ralegan Siddhi on Saturday night.

Hazare who has started his Indefinite Hunger Strike in Ralegaon Siddhi on January 30 Wednesday is demanding the formation of Lokpal at the Centre and Lokayuktas in the states. He is also demanding the Implementation of Swaminathan Committee Recommendations. His Doctor Dr Dhananjay Pote told PTI on Friday, “There has been a significant increase in blood pressure and blood sugar when I examined Hazare in the morning on Friday.”

Local residents, who have come out in large numbers in support, accused the state and Central governments of ignoring his demands. Several of them also protested Friday in front of the office of Ram Shinde, the district’s guardian minister, a close aide of Hazare said.