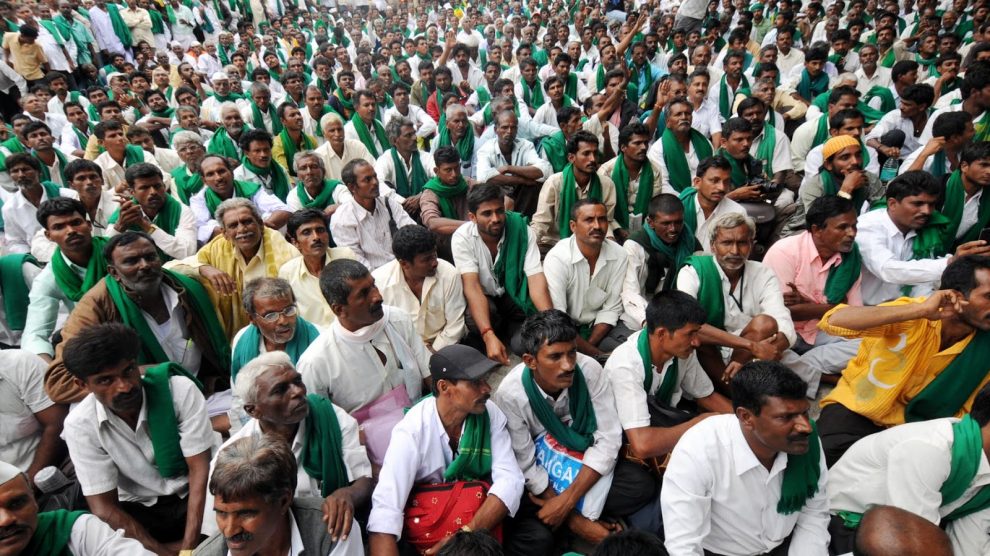 Farmers across India will unite together on one platform and begin a march on 6 July demanding for the increase in MPS & grant loan waiver.

The farmers across the country are in an agitated state as in spite of a full harvest this year, they were unable to pay their debts as the minimum support price (MPS) set for the farm products by the government was too low. The farmers demonstrated protest to increase the MPS and waive off their loans.

The most violent protests could be seen in states seen in Maharashtra and Madhya Pradesh. The protest initially began from Maharashtra with lakhs of farmers gathered together for strike putting up their demand. The farmers there decided to stop the supply of milk and vegetables and necessary farm products to cities. The uprising quickly spread to Madhya Pradesh also, where the streets saw massive violence and even 5 farmers were killed during police firing while stopping the demonstrating farmers.

To restore peace many states announced loan waiver for the farmers but had few conditions with it which the farmers did not agree to. Earlier the farmers of drought-hit state of Tamil Nadu has also put up a strike for 41 days in New Delhi and did shocking things like holding rats and snakes in their mouth and carrying skulls of farmers who had committed suicide. Following on their footsteps farmers across the nation demonstrated protest.

Now the farmers are again planning up to unite as one on a single platform and demand for the increase in MPS set for the farm products. Though this is the first of its kind when all the farmers will come together and stand for a united cause, the outcome of this is still doubtful.

The farmers will be uniting together on July 6 which marks the completion of one month of the killing of 5 farmers in police firing at Mandsaur in Madhya Pradesh. The yatra will be carried out in three phase, concluding at Champaran in Bihar, which will also be celebrating 100 years of Champaran Satyagraha launched by Mahatma Gandhi.

Farmer leader Sharad Joshi coined the phrase of Bharat vs India, saying that the major reason behind the unrest of the farmers is the rapidly growing distance between the urban and the rural areas. According to the farmers the discrimination done between the urban and the rural people is causing a lot of trouble. The farmers of Harayana protested on the caste discrimination and protest were carried out by Jat community by not supplying farm products to urban areas. Rampal Jat of the Kisan Mahapanchayat from Rajasthan also said that farmers were discriminated from local people. He also demanded the implementation of Swaminathan Commission in regard with the MPS.

A farmer from the Jat community said that farmers have always been fighting for subsidised water, electricity, fertilisers, etc, but this was the first time the farmers had united together for one single cause.

The loan waiver announced by Uttar Pradesh triggered all the farmers of other states also specially BJP led states to demand for a complete loan waiver.

After the agitation of farmers seen in many states, the farmers from across the country came together in New Delhi and formed the All India Kisan Sangharsh Co-ordination Committee (AIKSCC). Founding member of Swaraj Abhiyan and Jai Kisan Andolan and a member of the core committee of AIKCC, wrote on Facebook that “The first and foremost task of AIKSCC is to strengthen and direct the ongoing farmers’ revolt in several parts of the country.
We recognise that there are two core issues for farmers’ movements, common and pressing for all farmers across the country: remunerative prices and freedom from debt.”

Raju Shetty, founder leader of the Swabhimani Shetkari Sangathan from Maharashtra and a member of the AIKCC core committee, said that the uniting of the farmers was not any planned agenda of political leaders but happened spontaneously, they faced issues of communication as regional languages were different but still they managed to convey their feeling to each other as the problem they were facing was the same.

Sunilam, convener of the Rashtriya Kisan Majdoor Sangthan said that another reason for the farmers to unite as one is that, they have realised that if they stand united the government will not be able to suppress their demands nor will they have the chance to buy out the farmers by giving them luring options.

However the Veterans of the farm movements are not sure about the outcome of this unity and that how long it will last because apart from the language issues they will have to face diversities in other areas also like caste, crops, regions and camps of egoistic leaders and their factions.

GST to increase mutual funds, insurances by 3%
Pros and cons for startups after GST implementation